The following is an article from The Athletic on Jalen Suggs...

In Jalen Suggs’ mind, the ideal collegiate prequel to a lengthy, fortuitous NBA career would go a little something like this: Lead his team to the College Football Playoff or a New Year’s Six bowl game. Trade in the cleats for a pair of sneakers and commandeer a run to the Final Four. Declare for the NBA Draft.

A fairytale script for most, but Suggs is not like most. He’s a four-star quarterback recruit who claimed offers from luminaries such as Ohio State and Georgia. He’s also a five-star point guard headed to Gonzaga this fall as the best recruit in program history. There’s just one problem: Gonzaga doesn’t have a football team.

But Suggs, who starred at Minnehaha Academy in Minneapolis, is content to scrap his dream scenario and embrace the path that prioritizes his basketball journey. The football chapter of his sports novel concluded earlier than he’d prefer, but it’s a choice he has long understood would come. His father, Larry, has reminded Jalen of this since childhood and has always spoken to him as an adult during those conversations. From the time Jalen embarked on his athletic endeavors at the age of 4, playing baseball, football and basketball, and running track for much of his life, Larry has cautioned him of the impending crossroads, encouraging him to make decisions by balancing a love of each sport with the most prosperous professional possibilities.

"I have the chance to go real high in the draft next year and that’s an opportunity that many people don’t get," says Suggs, who is No. 15 on The Athletic 40, our ranking of the top high school prospects regardless of class. "Picking Gonzaga, which has no football program, just helps me focus all my time and energy toward basketball for the time being, working my best to be as successful as I can."

Gonzaga assistant coach Brian Michaelson — whom Suggs says he talks with everyday — initiated a connection in 2018 as Suggs was getting going on the grassroots circuit, putting Suggs in contact with coach Mark Few and jump-starting the recruiting cycle. Although the Bulldogs reached out later than Suggs appreciated, Gonzaga was "the clear-cut choice." Few’s player-coach balance as an instructor enticed Suggs, who considers the 57-year-old to be family.

"My dad’s been my coach pretty much all of my life and he’s pretty much my best friend," Suggs says. "To have someone like that is, I wouldn’t say amongst my dad, because I don’t think anyone can top him, but to get it up there with him, it shows a lot to me."

Members of the program told him they’d do "everything in their power" to advance him toward his goals of being a one-and-done collegiate star and flourishing in the NBA. Suggs was drawn toward Gonzaga’s rich lineage of guard play. He admired that the offense is centered around pick-and-rolls, flanked by shooters on the perimeter. With his explosive slashing prowess and comfort with ball screens, Suggs was intrigued by the potential to be a lead guard in Spokane.

Redshirt senior Josh Perkins and graduate transfer Geno Crandall were set to depart in the spring of 2019 and coaches told Suggs that two more graduate transfers — who became Ryan Woolridge and Admon Gilder Jr. — most likely would fill the backcourt void the following year. By the time Suggs arrived on campus for the 2020-21 season, he would own the keys to the offense. There’d be no ball-dominant incumbents parked in front of him.

In early February 2019, Suggs visited campus and watched as the Zags routed conference rival Saint Mary’s, witnessing The Kennel atmosphere swell to its nationally lauded peak. He tagged along with Perkins, Crandall and Joel Ayayi for much of that trip. He reviewed film with the coaching staff, talking through the decision-making process of players in various clips. Since then, Gonzaga’s coaches have regularly sent him video to examine.

Last summer at the FIBA U19 World Cup, Suggs, playing for the U.S., spent significant time with Ayayi (France) and Filip Petrusev (Serbia), two players who occupied a backseat role early in their college careers and are testaments to the Zags’ developmental system, which Suggs says conveys the Bulldogs’ care for their players and intentions to maximize the skill set of everyone who ventures through Spokane. Suggs will not adhere to the same patience-laden arc taken by Ayayi and Petrusev, but views them as manifestations of the ways Gonzaga can amplify his NBA potential.

He envisions a team that has a chance to win a national title next season, brings in top-100 recruits Julian Strawther and Dominick Harris — two of Suggs’ close friends — and has constantly reinforced its promise to expand his basketball brilliance while employing him in a high-usage role.

"It was all just music to my ears," says Suggs, whose other finalists when he declared in January were Florida, Florida State, Iowa State and Minnesota. "Once you add Dom and Julian into that mix, I mean, everything’s perfect in my eyes.

"I was sold from Day 1. There was no other option for me."

Hooked on hoops shortly after birth, 5-year-old Jalen began staying up late with Larry to watch Gonzaga games. Those nighttime viewing parties turned into film sessions. Larry preached for his son to note the floor spacing, how ballhandlers reacted when pressured and the screen-heavy nature of the Zags’ attack.

Familiarity bred admiration. Jalen gravitated toward that style of play, which influenced his college decision. The transition to Few’s offense won’t be overwhelming because Suggs has studied it for more than a decade, learning the nuances of such a scheme through remote tutoring from past Bulldogs such as Jeremy Pargo and Kelly Olynyk.

"We called him ‘Savant of Basketball’ when he was really little because he could soak in information at a super young age," Larry says. "He knew what sets people were running, he knew how to go over, under, a ball screen at, like, 5 five years old." 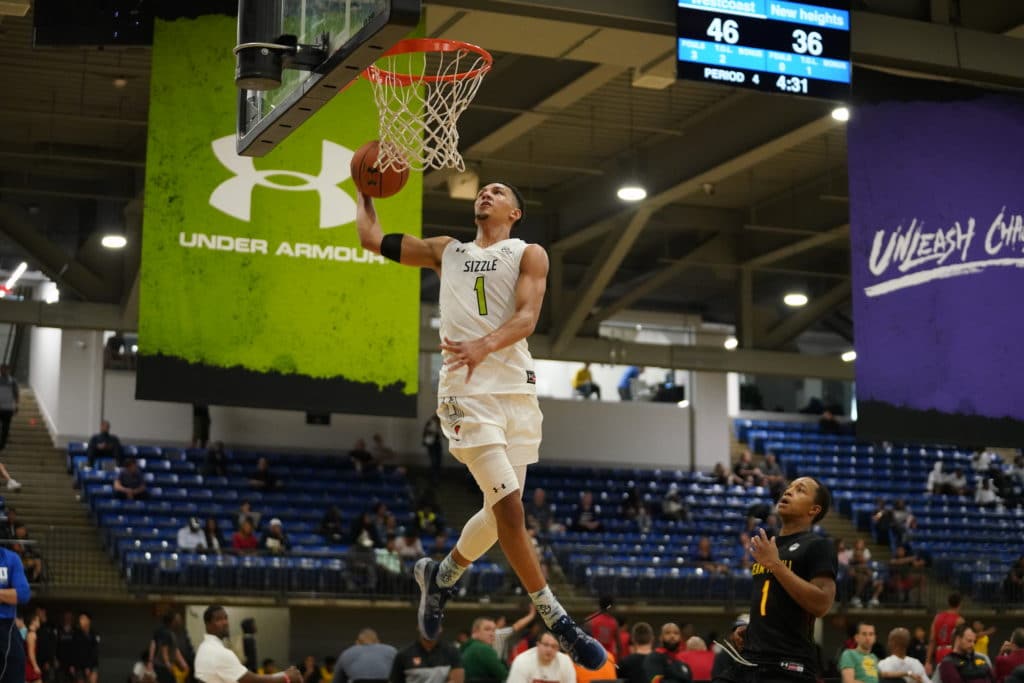 Suggs is a five-star basketball recruit, but was also a four-star quarterback who had major scholarship offers. (Kelly Kline / Under Armour)

Among more recent players, Suggs has benefited from Perkins’ pick-and-roll craft, citing his patience, vision and decision-making. Perkins, Suggs says, always making the proper read, whether it was rising for his trademark floater, threading a pass to the roller inside or dishing it to a shooter on the wing. From junior forward Corey Kispert, a career 39.3 percent 3-point shooter, Suggs absorbs the value of shot preparation and footwork.

And then there was the time a youthful Jalen, who road-tripped with Larry and a buddy to watch the Mike Miller Classic in Sioux Falls, S.D., and found his way into an open court run with Nigel Williams-Goss, who played at high school powerhouse Findlay Prep at the time and later at Gonzaga. A sharp-minded kid, Jalen knew Findlay Prep was tucked away in a back gym and wandered over to watch some of his favorite players, including guards Myck Kabongo (who would play at Texas) and Nick Johnson (Arizona).

Before long, the transition from standby viewer to active participant was complete. Jalen was running three-on-three scrimmages with some of the nation’s best high-schoolers. He was firing lob passes. He was exhibiting moves some of his elders in the room couldn’t emulate, an occurrence that sparked laughter throughout the gym. Most important, though, he was receiving a firsthand lesson from Williams-Goss’ approach as a lead guard — an approach Suggs tracked throughout Williams-Goss’ tenure at Gonzaga.

"Just really liked the way he played with so much poise and in control of what he was doing," Suggs says. "That’s one big thing that I try to add to my game as well, is trying to be in control of myself at all times."

Much like Williams-Goss did in 2017, Suggs is determined to lead Gonzaga to the title game next season. If Petrusev, Kispert and Ayayi all bypass the NBA Draft, the Bulldogs will welcome back everyone aside from their three seniors (Woolridge, Gilder and forward Killian Tillie) from this year’s team, which went 31-2 and was bound to earn a No. 1 seed in the NCAA Tournament before its cancellation. Even if Petrusev, Kispert or Ayayi leave, freshman forward Anton Watson returns healthy; redshirt freshman Oumar Ballo will be eligible; Suggs, Strawther and Harris compose a top-10 recruiting class.

Unlike Wiliams-Goss, whose final game as a Zag came in a national championship loss to North Carolina, Suggs intends to experience triumph, not heartbreak, in his collegiate farewell. After Suggs’ high school basketball career and Gonzaga’s 2019-20 campaign were cut short in response to the COVID-19 pandemic, the two parties will unite in pursuit of the program’s inaugural title.

"They’ve always just been missing that one big superstar, that one big missing piece. I feel like I’d come in, fill that role and bring the Zags to a championship," Suggs says. "And I tell you what, I definitely don’t want to leave Spokane without one."

Suggs might never arrive in Spokane, though. He could opt to spend a year playing overseas in preparation for the 2021 NBA Draft and never suit up for Gonzaga. Yet Larry says coronavirus has complicated talks with teams and while the door is ajar, that likelihood has diminished. Still, Larry acknowledges it’s paramount to explore professional options when such a route is accessible.

"We really took a hard look at it, but it’d be hard to do any type of business meetings with the virus that has hit all over the world, so that part has slowed down," Larry says. "For the most part, I mean, he’s all ready to be a Zag, you know, if that (professional) part doesn’t really come through."

To Suggs’ credit, he is constantly reaffirming his commitment to Gonzaga, both in interviews and through social media. The plan remains that on June 14, he’ll trek to Spokane for his freshman year and commence workouts, classes, a drive to forge history and aim to elevate his draft stock. Maybe not the blueprint he once imagined but a suitable contingency plan nonetheless.

"Man, I truly can’t wait to get down there, get started and seize the day," Suggs says. "We definitely have some unfinished business."

This post does not reflect the views of the blog authors or SB Nation.

More from The Slipper Still Fits