Gonzaga commit Josh Perkins will look to guide his team to a national title...

Well, the offseason is officially underway for the Gonzaga Bulldogs and, with that, we turn our full attention to the beautiful, yet frustrating, world of recruiting. With prospects that literally stretch across the entire globe, covering Gonzaga recruiting has never been more enjoyable. In addition to the international flair, the Gonzaga staff has also assembled quite the pipeline of domestic talent. That is very evident when looking at the upcoming Dick's Sporting Goods High School National Tournament.

Starting on Thursday, April 3rd in New York City, the Dick's Sporting Goods High School National Tournament will decide the top high school program in the country. Eight teams were selected from thousands across the nation and among those are Huntington Prep and Rainier Beach. Huntington Prep is the No. 4 seed in the tournament and features Gonzaga commit Josh Perkins. Perkins starts at point guard for Huntington and is surrounded by a who's who cast of D1 talent. Perkins has had a solid, albeit not explosive senior season, averaging 8 points, 5 assists, and 4 rebounds per game.

For Rainier Beach, it has been an absolute dream season. They enter this tournament as the No. 2 seed and were granted a late waiver from the state of Washington to even compete for this title. They have yet to lose a game this season and come to New York with a 29-0 record. Interestingly enough, they took down Silas Melson's Jefferson High School team early in the season by a score of 90-72. Melson had 32 points in the loss. The name to watch for Rainier Beach is Dejounte Murray. Murray is a 2015 prospect who has shot up the recruiting boards this year and will have his choice of elite programs when decision day comes. The Zags have been in on Murray for quite some time.

As I said earlier, the tournament starts on April 3rd. Perkins and Huntington Prep will kick off at 9am pacific against La Lumiere. Rainier Beach will square off at 1pm against perennial power Findlay Prep. Each game in the quarterfinals can be seen on ESPNU. The tournament concludes Saturday, April 5th at Madison Square Garden on ESPN. Full bracket below: 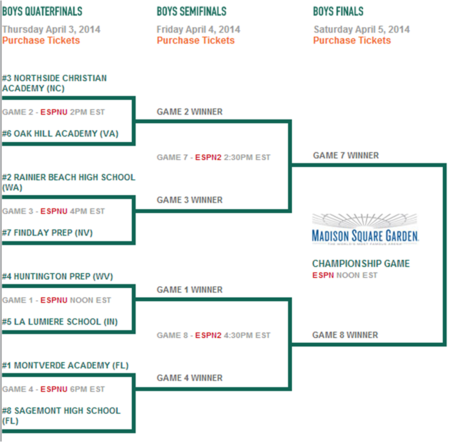