It takes an equal combination of both to win the NCAA Tournament.

I'm not going to lie. I love the NCAA Tournament so much. I think I love the idea of filling out brackets and doling out money all over the place in a feeble attempt to win it all. This year, there is a lot on the line. A BILLION DOLLARS.

I probably won't win that. It probably will be some 90-year-old librarian who picked his/her favorite teams based on the color of the mascots underwear and whether or not the approximate distance from his/her house to the campus is divisible by a prime number. Still, there is a fair amount of skill involved in making the perfect bracket, but mostly it is luck. All freaking luck.

So without further ado, here are my Final Four picks and how they get to where they will get to: Florida, Michigan State, Wisconsin and Louisville. 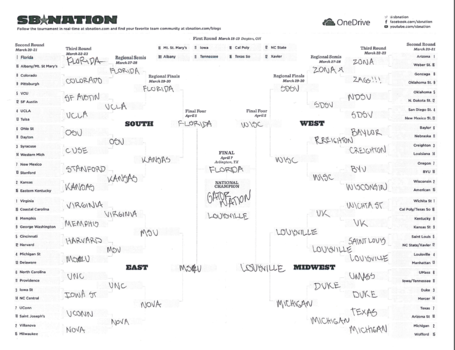 Florida is kind of a no-brainer here for me. The south region is pretty stacked, but Florida has been winning basically all season. The Gators are the hottest team going into the tournament (disclaimer: yes they are hotter than Wichita State because the Gators have been doing it in the SEC -- I respect what Wichita State is doing, but Florida has had a much tougher slate while winning nearly as many games) led by stellar senior leaders in Casey Prather and Scottie Wilbekin. The Gators don't win a lot of pretty games, but they win games -- that is what counts.

Kansas will make it to the Elite Eight, but considering the fragile nature of Joel Embiid's back, it is tough to put them past Florida. The Jayhawks definitely have the talent, but the talent might not be there in that game. Bill Self also has an incredibly young team, and that will be a tough time putting away a veteran team like Florida. Syracuse is going to get bounced in the third round because the Orange have been awful lately. Also, that Florida and UCLA Sweet 16 matchup will be a blast to watch.

GONZAGA ALL THE WAY! Just kidding. Even when the Zags are good, a wise man once told me, you never bet on your team to win it. Because if they do win it, you'll be stoked beyond belief. If they don't win it, at least you have the money you won to fall back on. This year, it isn't so much a problem as I don't envision Gonzaga pushing past Arizona. I also don't envision Arizona pushing past a lot of people in this region. Wisconsin is a very good team and will be an interesting matchup against Arizona. The Wildcats don't like to push the tempo, and the Badgers aren't exactly a bunch of super-charged engines on the court. Arizona's defense is good (the best actually), but nobody plays a slow game like Bo Ryan does.

Remember the beginning of the year when everyone was saying that the Michigan State Spartans are title contenders? Well, I still sort of believe that. Tom Izzo is the king of having his team peak at the right time, and the Spartans are currently peaking at the right time. Michigan State also has one of the easier treks to the Final Four. They have probably the weakest No. 1 and No. 2 seeds in the field (which isn't saying very much), and not too many potential pitfalls along the way. Harvard will upset Cincinnati, giving Michigan State a much easier third round game. Sometimes the blind gut feeling is the one that drives the choices, and that is Michigan State for me in the east region.

Seriously, so many ouches for Wichita State. The committee obviously isn't the biggest fan by placing Kentucky and a beserkly underseeded Louisville team in its region. How underseeded is Louisville? Well, for starters, the Cardinals are the defending national champions. They are ranked No. 5 in the polls and No. 2 according to Ken Pomeroy. The RPI isn't as high on Louisville, which is why I imagine it sits where it does, but this team is coming in hot. Louisville made a complete laugher of the AAC Tournament. They have Russ Smith, one of the top players in the nation, playing even better than he did last year, when he was also one of the top players in the nation.

The thing is, Louisville won't have to face Wichita State until the Elite Eight. Wichita State definitely has the history to make the run, but Louisville is a better team than the Shockers. The big question is whether or not Wichita State will be able to push past Kentucky in the third round. Kentucky is either a team that registers "meh" on the wow test or a team that makes you watch ever single possession. John Calipari usually does a pretty good job of making sure that the more exciting version shows up in the tournament. The question isn't so much if Wichita State can hang with the big boys this year (the Shockers can, you don't go undefeated as a fluke), but whether or not it can compete with Kentucky's athleticism. I say no. Take a look at Wichita State's wins in the tournament last year. Pittsburgh, La Salle, Gonzaga and Ohio State -- not exactly four of the most athletic teams out there. Kentucky can go on a 15-0 run in a heartbeat, and I'm not sure Wichita State can hold it back.

That'll be the Florida Gators. Florida has taken every doubt hurled its way this season, brushed it aside, and won. Florida also has had a lot of legitimate doubts thrown its way this season. But right now, it is so hard to bet against the Gators and that is why they'll be cutting down the nets in April.

Who do you think has the best chance at making waves this glorious NCAA Tournament?