David Stockton finally almost achieved the admiration he has so sorely desired his entire life.

Poor David Stockton can't even slide into his father's college slippers in a cute and endearing way worth videotaping for future memories. John Stockton finished his Gonzaga career with 1,340 points, 554 assists and 262 steals. David is at 517 points (with the added benefit of the three-point line), 344 assists and 138 steals. Excluding the fact that the younger Stockton has no chance of catching the elder Stockton's collegiate stats, even if David Stockton was the justifiable No. 1 pick of the 2014 NBA Draft, he would never come close to equalling what his dad did in the NBA.

I think that is why, largely, when the inevitable pan to John Stockton live in the Spokane crowd comes, he more often than not has a slight variation on the following face. 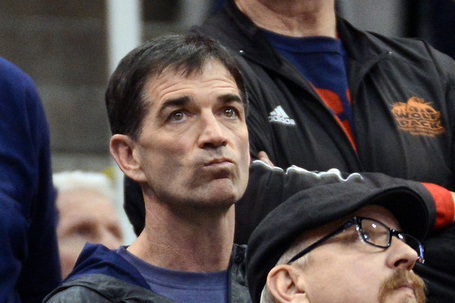 What we have there is the portrait of a father clapping....almost. We'll ignore the fact that John Stockton isn't using both hands. Rather, he is using a folded up piece of paper like he is ready to go home and discipline the family dog. But then, that is just the first glance. The old lady next to his left is going totally bonkers with her piece of paper. The person one row ahead and to his right looks almost as disinterested as John Stockton is. But we will take baby steps here. For three and a half years we have witnessed a John Stockton forever disgusted by the dearth of talent laid out before him every home game. Now, we have John Stockton - Gonzaga fan.

Unfortunately, for Baby Stocks, the show of support didn't come from anything he had a hand in. Here was the previous play. You'll notice David Stockton hanging out in the bottom of the clip, away from the action.

But hey, in my book progress is progress. John Stockton was clapping at a Gonzaga game while his son was on the court. By the end of his senior year he might actually crack a smile after David Stockton scores points.