Maui Invitational 2013 preview: Gonzaga in the mix of a loaded field

For the first time in 30 years, every single team heading into the Maui Invitational is undefeated.

Share All sharing options for: Maui Invitational 2013 preview: Gonzaga in the mix of a loaded field

The Gonzaga Bulldogs flee the cold, dreary days of Spokane for the sunshine and casual wear in Maui as they take part in one of the more premier early season tournaments in the nation.

This year, for the first time in the 30 years of the tournaments history, all eight teams entering the Maui Invitational are undefeated. Needless to say, with the likes of Arkansas, California, Baylor and Syracuse in the mix, this is a tough field and will be the toughest barometer the Bulldogs have faced so far.

Lets take a quick profile of all the teams participating in the tournament, starting with the Dayton Flyers, Gonzaga's first opponent on Monday.

Dayton won the Maui Invitational back in 2002 and are probably considered a long-shot to repeat the feat this year. But they aren't a team to look past by any means. The Flyers spread the wealth pretty well with five players averaging double-digit points, led by junior guard Jordan Sibert with 13.8 points per game. Sibert attended Ohio State for the first two years of his career and had a stellar game in Dayton's impressive win on the road against Georgia Tech when he finished with 20 points.

The Flyers will have their hands full against Przemek Karnowski and Sam Dower. The frontcourt isn't a strong suit at all for Dayton and they run a pretty small line-up out most of the time. They don't do anything too impressively, but they are a good shooting team. They average 50 percent when taking a two point shot, and their three-point percentage of 40 percent is good for 54th in the nation. Luckily for Gonzaga, they barely attempt any threes. But Gonzaga will need to be on point for defense. The Zags shouldn't have too much of a problem, but this will be their toughest test of the season so far. 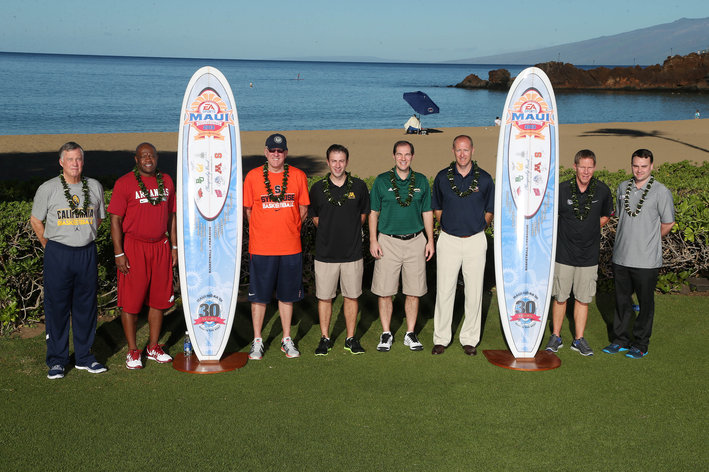 A few great SB Nation blogs got together to answer a few questions about the upcoming Maui Invitational...

It is too bad that the Razorbacks most likely won't face Gonzaga, because this would be a great team to gauge how well Kevin Pangos and company can do against better defenders. Arkansas has only allowed 15 three pointers in three games, and they defense with a solid intensity. Junior forward Alandise Harris anchors this team, averaging 18.3 points per game. They don't wow offensively, but their 88 points per game ranks 27th in the nation.

Assuming Gonzaga beats Dayton, and assuming Baylor beats Chaminade, then Baylor will be the Bulldogs second day opponent. The Baylor Bears will be quite the tough test for the Bulldogs, because their strengths play right into our weaknesses. Baylor is led by guard Brady Heslip, who averages 15 points a game and gets a hearty portion of that from beyond the three-point line. Heslip is 14-for-27 on the year, good for close to 52 percent. Not only that, but the Baylor defense is pretty stellar. They are an athletic team that clamps down, and has only allowed opponents to shoot 34 percent.

Between 7'1 Isaiah Austin and 6'9 Cory Jefferson, Baylor has the size to match the Zags in the paint. They don't pick up a lot of offensive rebounds, but they crash the defensive glass with a fury. Baylor will be the most stiff defensive test for Gonzaga on the year, and it will be interesting seeing how the hot hand matches up against a team that has played some solid opponents. Baylor has wins over Colorado and South Carolina already, but they have struggled at times. They just barely escaped with a five-point victory over Charleston Southern most recently.

California is the perfect team to point out why it isn't the best to only look at the RPI ranking when determining how a team is performing. Their RPI is down in the pits because the Bears haven't really played anyone outside of Oakland (who they only beat by four points). But they are an efficient team on defense, hence the high Kenpom rating. The Bears lost only one player from last year's NCAA Tournament team. Granted, that player was Allen Crabbe, but freshman guard Jabari Bird has filled those shoes nicely. Cal's defensive statistics are pretty impressive, but they haven't come against quality opponents. It will be interesting to see what this team is really made of in the tournament.

With Richard Pitino Jr. at the helm, the son of the famed Louisville coach employs a lot of the same tactics. Little Pitino has Minnesota in the same 2-2-1 full-court pressure defense the Cardinals often use, and it is paying off. The team is averaging nearly nine steals a game. The Golden Gophers had a shift of focus from last year. They lost their entire frontcourt, but Andre Hollins and Austin Hollins (no relation) are one of the better backcourts in the nation, combining for 32 points a game. Junior center Eliott Eliason has been stellar since moving into the starting line-up this year. He averages 7.6 points but changes the game with 3.2 blocks per game.

Syracuse is the cream of the Maui crop and a potential matchup in the championship game has me involuntarily losing my bowels in fear just thinking about it. The famed Syracuse zone is doing what it does every year -- make people not score many points at all. Syracuse has also shown a decent amount of offensive flair, although they almost fell very short against St. Francis with a six-point win. Their frontcourt is experienced, deep and would present the worst matchup issues for Gonzaga.