Share All sharing options for: Yahoo: Zags Atop The West Coast Conference

Yahoo's Jeff Eisenberg provides a nice five-minute rundown of what to expect and what to watch for this season in the West Coast Conference. Here is how he has the conference shaking out: 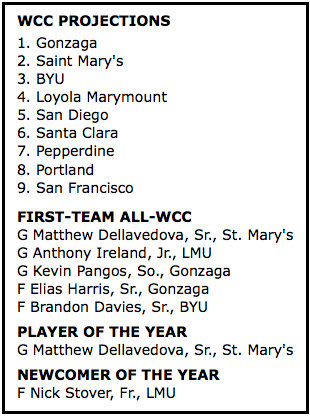 The author shows a nice understanding of the conference dynamics particularly as it relates to some of the mid to lower tier teams. At this point, LMU and USD definitely appear capable of pulling an upset, especially San Diego as they have a couple guys that can be very streaky shooters.

As for his remarks on Gonzaga, nothing too Earth-shattering even though I can't help but tense up when I read something like the following:

Top NBA prospect: Matthew Dellavedova, Saint Mary's. Hard to believe this isn't Elias Harris, but the 6-foot-7 senior has plateaued since the days when he was considered a surefire first-rounder as an underclassmen. Dellavedova probably lacks the athleticism to go in the first round, but his toughness, craftiness and ability to finish at the rim ought to get him second-round consideration.

Elias shouldn't have any problem with motivation this season with all the pundits saying he has 'regressed' or 'plateaued' since his freshman season. I think the point above and Eisenberg's choice of best backcourt in the league is likely going to change as soon as we get to Christmas.

2012-13 Hype Tracker: Who's Saying What Nationally