Even with a Washington State 4A Title and Tournament MVP award under his belt, Gonzaga Prep's Chris Sarbaugh is arguably the lowest profile freshmen recruit on this year's Gonzaga men's team. This hasn't prevented fans from prescribing him vague distillations of hype - some argue seeing him play locally for several years has given them more insight into Sarbaugh's abilities than those of the Fast Other Four. While this is probably true, and while it's fun and good to watch our incoming players as much as possible, the path connecting visual high school evidence of any player to collegiate expectations is extraordinarily treacherous and usually a disadvantageous one to take. Sarbaugh, along with any other incoming Gonzaga player, "could be the best Zag we've ever had." He also could be "the biggest bust we've ever had." Not only do those type of predictions lack quantifiable meaning, but they prime fans to believe Gonzaga players exist in a vaccum. Hundreds of different variables - coaching decisions, injuries, personal issues, opponent matchups, random chance - will come into play this year, destroying any notion of a vacuum and creating the specific context in which quantifiable events take place. At the conclusion of those quantifiable events we'll be able to begin the discussion of what kind of player Sarbaugh was/is. Thus, my focus in these series of previews will rely not on ultimately meaningless and probably incorrect guesswork regarding what various players might achieve, but instead on the details surrounding these players' time at Gonzaga that are actually, you know, known. 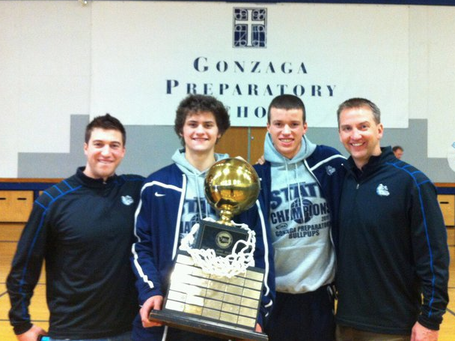 The pertinent Sarbaugh detail is his all-but-official decision to red shirt this season. The six-foot-three guard is recovering from left arthroscopic knee surgery that took place toward the end of last July. Speculation surfaced this summer that Sarbaugh would make a quick return from the operation, in time for fall practices. As a former basketball player who has had the exact surgery Sarbaugh had at a similar age, I can attest to the benefit of him taking his time to recoup. Even beyond the debilitation of his injury, Sarbaugh's year off makes more sense due to the mathematics of the roster. Despite Manny Arop and Demetri Goodson's departures, Marquise Carter, Gary Bell, David Stockton, Kevin Pangos, Kyle Dranginis and Matis Keita will all be fighting for time at guard spots. Sarbaugh would take a spot in line behind each of them. Simply put: there is no need for a seventh guard this year. This is absolutely not to say that there won't be a need for one down the line; It's fun to envision what Sarbaugh's fifth year at Gonzaga could look like.

One of the benefits of Sarbaugh is that the team receives all his talent without having to give up a scholarship. Ironically, unless 2012 recruiting matters turn around in a hurry and the staff suddenly lands three recruits, that benefit probably won't be felt until the hopefully extant 2013 class (indeed, it will be intriguing to watch as the team's 13th and remaining scholarship is awarded this season to either Stockton, Mike Hart, Sarbaugh, a mixture of the three, or no one). The son of a former Gonzaga University history professor, Sarbaugh has lived and played basketball in Spokane his whole life. His high school and his university share the same name, as well as the same Jesuit ideals. Of his opportunity to play at the university: "I'm just living a childhood dream." He's earnest. There are some other known details: He's a local kid who grew up watching Gonzaga basketball like many of you, myself, and many other northwest basketball players. He dropped 22 on Bell's Kent High School team (as did Bell upon Sarbaugh's) in the State Tournament quarterfinals. He has a career spanning habit of diving after loose balls. He averaged 11 points per game with Gonzaga Prep his senior season. He did not play much, if at all, in the Zag team scrimmages this summer. In this author's experience, at least, he's been a nice guy to be around and appears to be well liked by his team mates. He was swiped up by Gonzaga just as larger schools were starting to take interest in him. He's Matt Bouldin's doppelganger.

What these details ultimately suggest - how they synthesize with one another and produce an outcome - is anyone's guess. Making an effective preview even more difficult is the realization that said guess can't even take place until 2012-2013. When Sarbaugh makes his first appearance in Zag uniform, Maruqise Carter and Robert Sacre won't be available, and there will be new talents taking up new roster slots. Needless to say, a lot remains to be seen before Sarbaugh ever touches the ball. Outcomes to stay tuned for include the long-term knee-healing, and what position (we'd hope it's shooting guard) the staff starts customizing him to over the next six months of practice. In the interim, we should consider the combination of his on and off-court circumstances not as extraneous, but as the only ones not subjected to guesswork, the first of many contextual variables in the five year equation of Chris Sarbaugh.

Up next: The equally enigmatic Kyle Dranginis.