The Katin Reinhardt Plot Thickens, Still Has Lots Of Thickening Left To Do

Share All sharing options for: The Katin Reinhardt Plot Thickens, Still Has Lots Of Thickening Left To Do 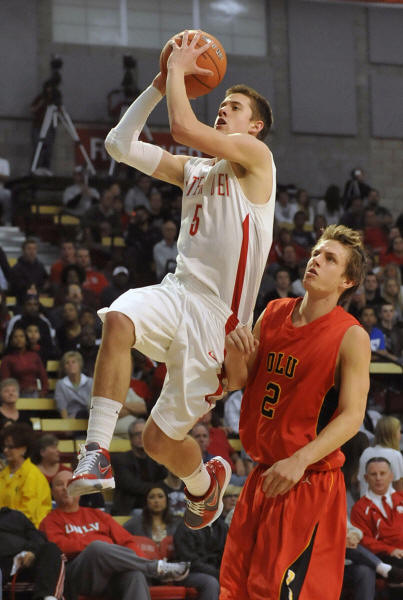 If you missed Zach's primer on blue chip recruit Katin Reinhardt, fear not. SSF spoke to The Mater Dei (Santa Ana) HS super guard last night for the first time about his plans for 2012. In an attempt to send a quiver into the loins of every red-blooded, news-starved GU fan, I'll lead with his opening salvo of the conversation, which was leveled with gusto before I could even get out a question.

"Gonzaga is a huge option for me. It's a great opportunity, so I'm looking at it and keeping that school as a top school."

And so the tempo of the dance of mutual seduction ticks a little quicker.

On just who, exactly, is doing the dancing, Reinhardt affirmed that it is not the cool swagger of Donny Daniels that's attempting to lure him to Spokane, but instead the slightly less graceful figure of an assiduous Tommy Lloyd hunched over a telephone in a Days Inn somewhere.

Lloyd has hit his marks, though, and made an especially indelible impression on Reinhardt during their multiple conversations with promises of playing time: "He mentioned the ability to come in start as a freshman. So, that really caught my attention, because I can play different spots, the one, two and three." For now, I'll save the commentary on the extraordinary ambitiousness of Lloyd's promises for another post.

It is clear, however, that both sides genuinely admire one another. Reinhardt noted that he was attracted to Gonzaga last fall before his commitment to USC, and that he thought Spokane would be a good fit for him. Mark Few has even gotten in on the Reinhardt re-auction, personally buttressing Lloyd's calls with missives of his own. Reinhardt says he plans on talking with Few, "in the next few days," and notes that Few has already talked to his father about coming to Gonzaga.

Reinhardt made minor waves a few weeks ago by de-committing from USC (someone should really give Kevin O'Neill some referral points, or something). But the USC staff stirred up the wake when they felt the need to publicly announce that they wouldn't be talking to him anymore. The waters really started roiling once Reinhardt put on a pair of standout performances at the Kevin Durant and NBPA Top 100 camps this month.

Reinhardt said his dismay with the Trojans concerned tactics.

"USC has a lot of set plays. I like to get up and down the floor, and you know, Gonzaga does that, they get up and down. And also, the way they would have used me, I would've just played a two at USC. Now that more people are seeing me play and saying that I could play the one at 6'5", that's valuable."

The level of commitment required in order to secure a commitment like Reinhardt's is undoubtedly increasing every day, as more and more teams are noticing a 6'5" guy who can shoot from outside, drive with the ball, and relishes finding open guys around him.

The four-star recruit revealed to us (we can't find it reported anywhere else, anyway) that he's holding fresh offers from UNLV and UTEP, putting his grand total at seven. And it's looking like a seven horse race.

"All those seven schools are all good in a way. I haven't really looked at other options yet. I don't really know what would be a top school, but I know I really like Gonzaga," he said. "It's a very good fit and a very good opportunity for me to help me get to my next goal. I wouldn't (rank the schools numerically) though."

And while several four-year-oriented schools continue to pursue the outgoing, affable kid from Santa Ana, he openly notes that he might not be around forever.

"I've thought about (leaving early and declaring for the NBA draft) and I've talked to a lot of people about it," he said.

"If I go to a school I will be focused on helping that school win a championship. That's first and foremost. If it happens to last one, two, three, four, however many years...if the opportunity comes, then I would love to take the chance to go play professionally. That would be one of my dreams."

He says he has no timetable for his decision, only that he plans to narrow his list of schools to five by the end of the summer, only after which point he plans to start making campus visits.

Clearly, Reinhardt is wisely keeping his options open. He's also 17, overwhelmed, and in the middle of trying to enjoy the little summer vacation he actually has. But even the most unmolded of amateur scouting minds (such as yours truly) can see that it's not a matter of 'if,' but 'when' Reinhardt will start attracting NBA attention.

He's a truly talented scorer -- I'm sticking vehemently to my Richie-Frahm-with-slashing-ability comparison until I see film that proves otherwise. In contrast to some of the bursts of timidity and confusion we witnessed on the perimeter in 2010-11, he treats tentativeness like a scourge, but wants to do so from three different vantage points.

This might encapsulate both Reinhardt's biggest benefit and drawback as far as the Zags are concerned, as fully utilizing his skill set could potentially come at the cost of exacerbating the backlog of the 9(!) different ones, twos, and threes on the 2012-13 team.

Whether or not any of this matters to the Gonzaga coaching staff remains to be seen. Regardless, look for Reinhardt's to be one of the slowly unfolding, dominant recruiting stories of the upcoming season.