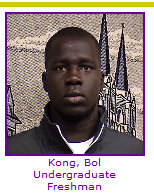 Going to college at the school of your dreams is the goal of many kids looking to take the next step in their lives.  The path to that certain school is typically arduous and takes years of hard work to achieve.  It's funny how all that hard work looks like childs play since we have begun tracking the story of Gonzaga's Bol Kong.  Kong's story is a story unlike anything I've ever heard.  Bol has been battling the United States immigration office for years now and has had his student visa request denied many times.  He was supposed to be at Gonzaga last season after transferring away from Douglas College in Canada but was unable to enter the country.  Kong and the Gonzaga administration and staff did not stop the process and kept pushing and a few days ago, right before his deadline to be eligible for the 2009-10 school year, Bol Kong was granted a student Visa and made his way to Spokane.

Kong's situation in Canada was a complex one and the fact that he is currently in Spokane is a testament to his dedication to following his dream.  Sudan is a country that has been on the United State's terrorist watch list for many years now and is known to harbor many Arab terrorist groups.  When Kong arrived in Canada he never established citizenship and that was one of the major hang-ups for quite some time in this case.  After the events of 9/11, it was nearly impossible for immigrants from one of these countries of Arab-influence to get  into the United States.  Bol was a victim of the harsh, but understandable, immigration laws and had to battle the system.  There is no doubt that Gonzaga and Mark Few put it upon themselves to get this kid in the country,  not only because of his skill, but because of his desire to follow his dream.  Needless to say, this process took Gonzaga fans on a long ride.

continue reading more about Bol's journey to Spokane after the jump...

In June, we thought the situation had been resolved and that Bol would be entering the country.  He was on the initial tryout list for the Canadian Men's Senior National team.  Obviously, for a person to play for a country's national team, they must be citizens so we immediately pieced together that Bol must have gotten his Canadian citizenship and that a student Visa to America would be easily ascertained.  We were wrong and the process dragged on to the point where both EDZ and I were unsure whether or not Bol would ever get into America.  The situation grew so complex that it was nearly impossible to follow and it was so delicate that you couldn't get a peep out of people in Gonzaga's or Bol's corner.  Once school started, the clock really began to tick.  Kong had a 12 day deadline to be enrolled at Gonzaga or else he would not be admitted for the fall semester and another year would be lost.  Thankfully, Bol's student visa was granted to him before that deadline and he is currently residing on the Gonzaga campus.  The picture in this article can only be taken in the basement of College Hall at Gonzaga so if you want visual proof, you got it.

Kong should be eligible to play immediately as he sat out last year after transferring from Douglas College.  From all indications, we feel that he will have an immediate impact on the floor for Mark Few.  His Douglas College team has held scrimmages against teams like Boise State, Oklahoma, Marquette, and Idaho.  He never scored less than 14 points in one of these games and topped out with 30 points against Boise State.  While that was two years ago, Bol has kept himself busy on the basketball court.  He will only have about two months to get used to his new teammates before Michigan State comes calling.

The first thing that jumps out when watching any highlights of Bol is just how natural of a scorer he is. There are times where he will hit a difficult jumper, or a tough reverse layup, but he makes it look so natural and effortless. This is a unique ability that not a lot of people possess. Equally impressive is the offensive repertoire that Bol has at its his disposal. While not being an explosive athlete by any measure, he uses his length and good body control to get to the rim with ease, and he has no problems finishing once he gets there. When a defender starts to give him space to prevent the dribble drive, it appears that Bol has a beautiful stroke all the way out to the three point line. He also gets tremendous elevation on his jump shot, and with his release point being so high, he should have no problem getting off contested jumpers. From the moment that practices start in September, Bol will be arguably the top pure scorer we have on this Gonzaga team, mostly because of the different ways he can score, and the ability he has to hit contested jumpers.

However, in watching highlights, there are some clear areas of concern that Bol will have to improve if he hopes to see the court and earn consistent minutes. The first issue I have, and this is something that will drive Coach Giacoletti absolutely nuts, is the fact that he is a lazy defender. In JC ball in Canada, Bol can rely on his length and athleticism to jump the passing lane or to block a shot from behind, but that won't fly when he is playing against Michigan St. There were a number of times when smaller and less athletic guards were getting their shots off with ease against Bol. With his length and athleticism, there is no reason that anyone should be getting of an easy shot against him, and it comes down to the fact that he does not exert enough effort and tenacity on the defensive end. Unless you are going to be like Adam Morrison and average close to 30 a game, you better play tough defense. In Bol's defense (no pun intended), I tend to think that this comes from a lack of coaching focus on the defensive end throughout his career. However, after his first week in practice, I get a feeling Bol might be sleeping in a defensive stance, with nightmares of Coach Few yelling at him to stay in his stance.

It's always good to see a story like this come together and have a happy ending for all parties involved and that is exactly what happened with Bol.  He has a maximum of three years at Gonzaga University before taking his game to the next level.  I know I speak for EDZ when I say that we are both very excited to see him on the court and making plays for Gonzaga University.