Share All sharing options for: FIBA U-19: 4th Quarter Collapse for Team Canada 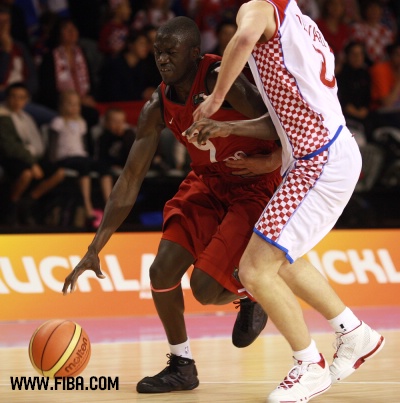 After a devastating loss to Spain to end the 1st round of pool play, many people hoped that Canada would find its stride in the the second round. However, a 4th quarter collapse, which mirrored the performance against Spain, doomed Canada to an 83-77 loss to Croatia in the opening game of the second round. It was another mixed bag performance for the duo of future Bulldogs, as yet again Kelly Olynyk struggled against the top competition in the tournament. Here is a quick look at the stat line for both Manny and Kelly against Croatia.

The most important thing I have learned about Mangisto Arop in this tournament, is that even when he isn't playing his best game, he will still find a way to be productive. With a 6/15 shooting performance from the field, it's clear that Manny wasn't shooting the ball with the consistency that he would have liked. However, because of the aggressive nature that he plays with, Manny was able to get to the rim and draw numerous fouls against Croatia. In fact, Mangisto made a living at the line, as he shot 9/10 from the charity stripe. Like he mentioned to us in our interview, the one aspect of his game that needs the most work is his shooting consistency. What excites me so much about Manny is how productive he is even without a consistent jumper. I really believe that by his sophomore year, Manny will be an All-WCC performer, and in all honesty, I think he is a terrific NBA prospect. After his performance today, Manny is the 5th leading scorer in the tournament with an average of 19.3 points per game.

While Manny continued to be one of the premier guys in this tournament, I think that Kelly Olynyk may be in danger of losing some playing time. Kelly had his least effective game of the tournament, as he scored only eight points in 32 minutes, and ended up fouling out. A lot of casual observers will see that Kelly is averaging 9.8 points and 8 rebounds for the tournament, and assume that he is playing well. However, when you take a deeper look at his stats, this hasn't been a pretty tournament for Kelly. After four games, Kelly has as many fouls (14) as he does made field goals. After his terrific performance in the warmup tournament in Douai, I hoped that this might be the breakout tournament for Kelly. Instead, all this has done is made me more certain that he would benefit most by having the opportunity to redshirt next year.

Canada returns to the court Tuesday morning at 1:30 AM, as they face a must win situation against Kazakhstan. If they can get by Kazakhstan, Canada will face Argentina, in what will amount to a must win game for the Canadians. As always, we will keep you updated on Kelly and Manny for as long as Canada remains in the tournament.