Fourth of July Zags Around the Web

Share All sharing options for: Fourth of July Zags Around the Web 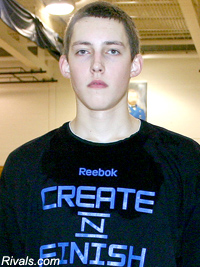 Game three for team Canada was a thriller against international heavyweight Spain.  Canada kept it close the entire game and battled back and forth but eventually fell 82-75.  It was another solid performance for Gonzaga's Mangisto Arop.  Manny finished the game with 17 points off of 7/15 shooting and pulled down six rebounds.  This hasn't been one of the better performances for fellow 2009 Zag commit Kelly Olynyk.   KO only converted on four of his 18 shooting attempts against Spain and only scored 10 points.  To his credit, he took advantage of Canada's height difference and pulled down 13 boards.  Canada, with a 1-2 record advances to the second round and moves into group F with Croatia, Spain, Argentina, and Kazakhstan.

Rivals recently updated their rankings for the 2010 and 2011 class last night and a few Gonzaga prospects made the list.  Gonzaga will only be losing Matt Bouldin and Will Foster next season and will have two scholarships available.  With one of those scholarships seemingly reserved by North Idaho College's Guy Marc-Michel, Gonzaga will have to be very careful with the second.  While it's possible that one of these guys could fit the bill, I'd be that the scholarship will go to someone a bit off the beaten path.  Here are the rankings for the guys that Gonzaga has been interested in:  PG Aaron Bright is at 114,  G Jordin Mayes is at 110, PF Alex Kirk is at 106, CG Keala King is at 35 C Josh Smith is at 6.

With Steven Gray being the only true junior on this team, the 2011 recruiting class will only consist of one new recruit if things go as planned and the Zags don't suffer any extra attrition.  The 2011 class is so good and looks to be so promising as far as players interested in Gonzaga that I wouldn't mind holding a scholarship from 2010 and waiting til 2011 to give it away.  Two Gonzaga prospects come in very high in Rivals.com's 2011 Rankings.  Arizona guard Nick Johnson is ranked 28th and Portland power forward Kyle Wiltjer (pictured above) is at 33.  Both are studs but Wiltjer is more realistic because of location.  Johnson will likely be an Arizona Wildcat.  A dream 2011 class would be Wiltjer and Gary Bell Jr of Kentridge High in the Seattle Area.

That is a pretty stacked list for a kid that still has quite a bit of high school left.  Wiltjer was up at Gonzaga's elite camp last weekend so hopefully he was impressed. He obviously sounds very impressed by Kansas and Bill Self and you can't blame him but it would be great to see Gonzaga go into Portland and keep their top player in the area.


That's all we got for you today as far as Gonzaga news is concerned! Hope everyone has a safe and happy Fourth of July!