Share All sharing options for: FIBA U-19: Mixed Bag for Team Canada 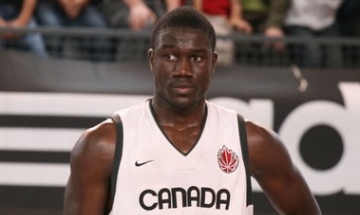 In a game that concluded just a matter of seconds ago, Team Canada opened up the FIBA U-19 tournament with a disappointing 88-77 loss to Australia. Prior to this opening game loss, Canada had been considered one of the favorites to win this tournament, as the team features Gonzaga commits Mangisto Arop and Kelly Olynyk, as well as the highly regarded duo of Corey Joseph and Tristan Thompson. However, I'm sure most of you don't read this blog for my views on the Canadian National team, so lets focus on the performances of Manny and Kelly. Here is a quick look at the stats that each put up in the loss tonight.

Let's start by examining the terrific performance of Manny Arop. When we interviewed Manny last week, he mentioned the tendinitis he had been battling over the past month. Well if this performance is any indication of how he is recovering, all I can do is offer a big thank you to the Canadian doctors. Manny was the best player on the court tonight, and kept Canada in the game almost by himself. I continue to be blown away by how well Manny rebounds for a guy who is only 6'5, and I absolutely love the aggression and passion that he plays with. With his ability to slash to the rim, it's no surprise that Manny was able to get to the free-throw line eight times tonight, and I certainly expect that number to grow when he starts playing in NCAA games, where the referees are much more inclined to protect the athletes. On a Canadian team featuring the #4 and #6 ranked players in the entire 2010 class, it's great to see that Manny is without a doubt, the leader and the best player on the team, and if his performance tonight is any indication, the best player in this tournament.

Unfortunately, Kelly Olynyk did not impress at the level that many Gonzaga fans hoped. I know there is an opinion going around that Kelly might be expected to contribute this year, but I don't buy it. Kelly was hampered with foul trouble throughout the first half, and to be honest, five of his 11 points came as the game was in the final two minutes, and the loss was inevitable. I am intrigued by the skill set that Kelly has, but I think that we will continue to see him struggle against the better teams in this tournament. Kelly won't be able to play against the best in the world until he is able to put on more strength, and until he is total comfortable with his frame.

Manny and Kelly return to the court tomorrow night at 5:30 PST, as Canada takes on Syria. I expect Canada to rebound from this tough loss, and come back and have a fairly east game against the Syrians. This is certainly a must win game, as Canada ends group play on Friday night with a very difficult game against Spain.

We will continue to update you on the play of Manny and Kelly throughout this tournament, and hopefully Canada can get back on the winning tack, and make sure they have a long stay in New Zealand.