Was it just a Dream?

Share All sharing options for: Was it just a Dream? 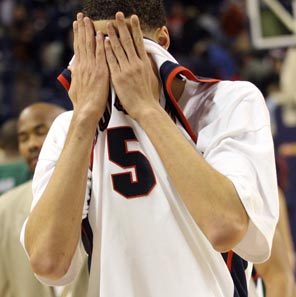 As corny and cliche as it may sound, I had a dream last night about the future of Austin Daye. In the dream, Austin was at a podium surrounded by reporters, and confidently announced "I will be returning to Gonzaga for my junior season." While this may have just been a dream, it clearly demonstrates just how much I have been thinking about what the future holds for Austin Daye and his Gonzaga career. Maybe it's the optimist in me, or maybe I am just a total homer, but despite the numerous reports, I continue to hold the belief and hope that we have not seen the last of Austin Daye in a Gonzaga uniform. No matter how much everyone continues to analyze the negative aspects of his game (ie. lacking strength and toughness), there is not one logical Gonzaga fan who believes that the team would somehow be better without Austin next year. With the deadline to pull out of the draft officially one week away, here is my reasoning for why we will see Austin in a Gonzaga uniform next season.

Coming into Gonzaga, Austin was one of the most highly regarded prospects in the country and averaged over 30 points per game his senior year of high school. Like many of the fans, I'm sure Austin believed that he would come to Gonzaga and be given the keys to Mark Few's offense. However, because of the abundance of scorers and upperclassmen, Austin was forced to play 3rd and 4th fiddle these past 2 years. This is not the fault of Coach Few or a shot at the development of Austin during his time in Spokane, but instead a display of the tremendous amount of talent that the 2008/2009 team had at its disposal.

As I mentioned earlier, Austin came here as a tremendous scorer, and as a guy who wanted the ball in his hands to take the last shot. Having never had the chance to be "the guy" at Gonzaga has to be something that weighs on Austin. However, if he returns next year, he will be the unquestioned focal point of the offense on every possession. While Matt Bouldin will certainly be one of the leaders and a viable scoring threat, I think even Matt would admit that he is more comfortable being the second option and is more comfortable looking to find the open player, as opposed to being the main option in the flex offense. Austin has the skill set and range to put together a 20 and 10 type season next year. What many of the scouts are openly questioning about Austin can be answered by simply coming back for one more year and taking advantage of the opportunity that he would be given.

The other aspect of returning that must appeal to Austin is the potential of being part of a great team. Make no mistake, if Austin doesn't return, Gonzaga will still be a Top 25 team, and likely will win the WCC and make the NCAA Tournament. However, with Austin back, I think you are looking at a Top 10 team, and a team that will be playing its best towards the end of the season. As Coach Giacoletti mentioned during our interview, this team will not be as inexperienced as many of us figured it might be. Look at this lineup and the depth that Coach Few could have.

This rotation presents the Zags with great leadership and experience in the starting lineup, and with tremendous athleticism and length coming off the bench. I would argue that with Austin back, Gonzaga, UW, and Cal would be the three top teams in the West, with any of the three staking claim to being the best. What better exposure would there be for Austin to lead a potential top 10 team against the Maui Invitational, or into Chicago to play Illinois, or leading a nationally ranked Gonzaga team to Madison Square Garden to play against Duke.. This schedule, with that type of talent surrounding him, will give Austin the opportunity to compete against and defeat some of the top programs in the country, while proving that he has the talent and mental makeup to play physically and dominate top competiton.

I understand the dilemma that Austin and his family will be facing over the next week (although according to one of our readers,the decision has already been made). However, I have to believe that Austin and his family understand the opportunity that Austin would have to boost his draft stock with a strong junior season. The only thing that is holding Austin back from being a Top 10 or even Top 5 pick is the lack of toughness and production he showed against the top teams on the schedule last year. With the chance to be the main focus in the offense, and to spend a summer in Spokane to work on his game and strength, Austin has a chance to prove to the NBA what many of us think and believe he is capable of. Maybe it was just a dream, and Austin is as good as gone, but for some reason I just have this belief that we have not seen the last of him in a Gonzaga uniform.

What do you guys think....am I just dreaming, or do you think Austin will be back for another year at Gonzaga?