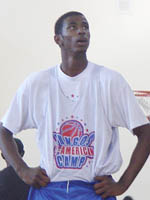 DeAndre Daniels has been a name on the Gonzaga radar for the past year. The highly skilled 6'7 SF was one of the star performers at the recent Pangos All-American camp, where he continued to mention Gonzaga as a school of interest. After seeing Gonzaga mentioned by Daniels, we decided to check in with his Nashville Celtics club coach, Jonathan Henderson. For those of you who have been following us for a long time, you may remember that Coach Henderson was kind enough to answer some of our questions back when we were the Kennel Report. We would like to thank Coach Henderson for taking the time to answer our questions, and for giving a great perspective on DeAndre and his recruitment.

Slipper Still Fits: At this point, what schools are recruiting DeAndre the hardest, and who has offered at this point?

Coach Henderson: Texas is probably on him the hardest.  He has offers from USC, AZ State to name a couple notables but others like Gonzaga, Wake Forest, Alabama, Georgia, and Memphis all have interest in him.

Slipper Still Fits: Although it's early in the AAU season, how do you think DeAndre has played, and where have you seen the most improvement in his game since last year?

Coach Henderson: He only played at Bob Gibbons TOC with us, but he played well overall.  Averaged 16.5ppg I believe in the 16U games and also played well in 17U play.  He is more active than last year and his ball skills have improved.

Slipper Still Fits: Both Rivals and Scout raved about DeAndre's performance at the Pangos All-American camp this past weekend. What do you think was so impressive about his performance?

Coach Henderson: Anytime you have a 6'8 kid that can put it on the floor, block shots, score at the bucket and from three, scouts take notice.  His length and athleticism are a big part of that as well.

Slipper Still Fits: From what we understand, DeAndre recently was classified as a member of the 2011 class. What led to this change, and what impact do you think it will have on his recruitment?

Coach Henderson: It will only help his recruitment as it gives him another year to add strength.  The change was related to an unstable school situation his sophomore year.  I was told he received a hardship because of it.

Slipper Still Fits: What is the schedule for DeAndre this summer? What AAU tournaments will he be competing in, and does he plan to take any unofficial visits or attend any elite camps?

Coach Henderson:   He will attend the University of Texas Elite camp.  Tentative schedule is Adidas Take 5 and Adidas Super 64.  He may take some summer classes to get ahead on his studies.

Slipper Still Fits: What type of offense do you think best suits DeAndre's game, and what do you think his greatest assest is on the offensive end of the court?

Coach Henderson: He could play in a variety of offenses but those that will utilize him as a face up 4/3 type guy will serve him best.  He is more comfortable on the perimeter although he is capable of scoring inside as well so he presents a tough matchup.  His ability to score different ways, coupled with his length/athleticism make him an asset on offense.  I compare him to Austin Daye.

Slipper Still Fits: What type of timeline does DeAndre have for making a commitment, and are there any schools that you think are really standing out for him, or are a great fit for him?

Coach Henderson: Never discussed a timeline with him, but I know he speaks favorably of Texas.  That being said, he seems open to the process and finding out who would be a good fit for him.  These days you never know when a player may commit though.  He will have a lot of suitors after July to compare and contrast.