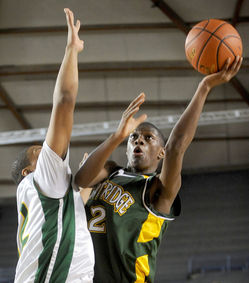 We are only two days away from the month of July, which means that the recruit evaluation period will officially be underway. With the change in recruiting rules, July will be the only month that the Gonzaga coaches will be allowed to go out and watch AAU tournaments in person, and evaluate prospects in a competitive environment. However, one advantage that Coach Few and the staff has, is that sometimes elite talent shows up at the Gonzaga Team Camps. During the first team camp, 2010 recruit Joe Harris was in attendance with his Chelan teammates, and this week, both Brett Kingma and Gary Bell Jr. are in attendance with their high school teams. Today, I had the opportunity to watch Gary Bell in person, and wanted to give Gonzaga fans a scouting report on the impressive 2011 guard.

Strengths: The first thing that jumps out when watching Bell is the tremendous speed and quickness he has with the ball in his hands. Whenever Kentridge was able to grab the rebound and outlet the ball to Bell, he created a fast break just by getting the ball in his hands. The way he dribbles the ball and gets such an incredible low center of gravity reminds me of the way Meech looks when he gets the ball in the open court.  I really can't believe that there would be many quicker guards in the class of 2011, and Bell was one of the quickest guys I have ever seen at the high school level.

Another impressive facet of Bell's game is the way he finishes in the lane. Bell is 6'0 on a good day, but he really attacks the rim well, and finishes among the big guys in the paint with great consistency. Bell also has a very strong floater that he finishes in the lane, and also does a great job of finding the open man when he attacks the paint. With his quickness, it's nearly impossible to keep Bell out of the lane, and as he continues to get stronger in his core and upper body, he will be very difficult to guard. It was incredible watching Bell go up against 6'6 and 6'7 guys and finish with his left hand.

Lastly, Bell has an edge to his game, and brings a great toughness to the court, which reminded me a little of watching Pargo and Meech play. Bell had no problem pushing and shoving with the bigs in the paint, and also was not afraid to get in the face of a teammate or opposing player after making a big play. Some people might be a little put off by the attitude he demonstrates on the court, but I absolutely loved it, and I think that type of toughness and grittiness is needed in the Gonzaga program.

Weaknesses: With his size, Bell really needs to continue to improve his PG skills. As I mentioned before, Bell is barely 6'0, but still plays with a SG mentality. While Bell has good natural passing ability and appears to have good vision, he tends to look for his shot and over-dribble, instead of trying to find the open guy, or run the offense. While he is able to compensate for his lack of instinct at the PG position at the high school position, he needs to continue to improve those skills to be ready to play PG at the DI level.

The other aspect of his game that needs work is his shot. Bell is actually an efficient shooter, but his release point is incredibly low, and for a guy his size, that could be a huge problem at the DI level. Unless he continues to improve his form, his shot will be easily defended by taller guards. In fact, the opposing coach noticed this and put a taller guard on Gary in the second half, and it really limited his ability to get off his shot and score. However, as he continues to get stronger and works on his shot, it will lead to a huge improvement in his production and also his ability so score and be dominant against taller guards.

I hope to see Bell again while he is at Gonzaga, and also hope to bring you a scouting report on Brett Kingma. What do you guys think about Bell? I personally think the staff needs to put the full court press on him, as he would be a great successor to Meech at the PG position.