The View Without Daye

Share All sharing options for: The View Without Daye 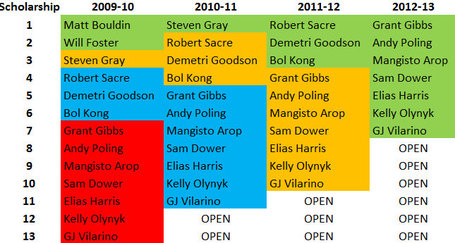 The youth movement is on.  Here is how the scholarships break down for the next four years.  Green=seniors, Yellow=Juniors, Blue= Sophomores, Red= Freshmen. Obviously this is subject to rapid change but here are some things of note:

This chart was a lot cooler with Austin Daye's name on it but the beat must go on.  The youth will be fun and it looks like Mark Few knew what he was doing by recruiting the hell out of the 2009 class.  Go out and get guys like Kyle Wiltjer and Gary Bell Jr. and good things can happen with the core he has amassed.