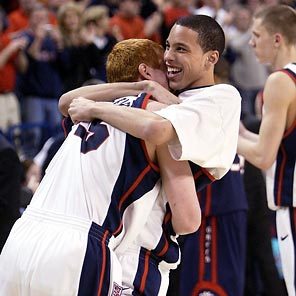 Since the day he declared for the NBA draft, Austin Daye has been one of the  most speculated about and discussed Zags I can remember. The question of what Austin will do come Monday and the NBA Draft deadline has been the source of so much discussion on this site, that we decided that it would be best to check in with Austin himself. We would really like to thank Austin for taking the time to do this interview with us, and just like he has in previous interviews, Austin really set himself apart from many other prospects with his sincere responses and the overall quality of the interview. This was the first chance that I have had to speak with Austin, and I came away impressed with his professionalism, and just how strong of an understanding he has on the impact of his decision.

Slipper Still Fits: Where have you worked out so far, and what workouts do you still have planned? Have there been any particular workouts that stood out for you?

Austin Daye: (Editors Note: During this question, we had some trouble with the service, and we would like to apologize to both Austin and any of the NBA teams that he has worked out with so far if we missed including them.) I have worked out in Phoenix, and then I went to the draft combine in Chicago, and then group workouts in Minnesota and Golden State, I worked out in Detroit, and then an individual workout in Toronto, then Charlotte, and I just finished a group workout in New Jersey. Then tomorrow I have a workout with New York.

Austin Daye: The positives for staying in the draft are that I can play and go against the best competition every day. I also can focus on basketball 24/7, instead of having to also focus on school and everything else. I love school, but I also want to be able to be the best basketball player I can possibly be, and compete against the best every day. There are lots of positives, and I think it definitely gives me the best chance to improve my game. At the same time, I'm still looking to make the best possible decision for my future.

For coming back to school, being able to be coached by Coach Few for another year and to be able to improve my game, even though it would be against a lesser level of competition. Also, being able to improve my draft stock with a strong year, but that's definitely not a guarantee even if I do come back. Also, being around the great friends that I have made and my teammates, and the Gonzaga community for another year would definitely be a positive.

Slipper Still Fits: After being a secondary option your first two years at Gonzaga, how much does the likelihood that you will be the #1 option at Gonzaga impact your choice?

Austin Daye: I think that I have already proven what I am capable of, and what I can contribute. I know what you are saying, but I don't think that any of that is a guarantee. I feel like Coach Few trusted me in the offense, and I was definitely an option and got lots of looks. But while it may seem like I would be, you know option 1A, it's never a guarantee and it's impossible to say if that would be the case. It is definitely something I'm thinking about, but at the same time, you can never for sure say that would be the case, or that's how it would turn out.

Slipper Still Fits: You have mentioned in previous interviews that you are looking for a guarantee between picks 1-20. Would you stay in the draft even if you do not receive that guarantee?

Austin Daye: I wouldn't say that I am looking for a guarantee, I think that has been taken out of context a little. Only like the top 5 picks actually receive guarantees. What I'm looking for is a team in the top 20 to tell me they are seriously considering me, and that I would be one of the top options for them when they pick. If I don't hear that from a team in the 10-20 range, then I would definitely come back to school.

Slipper Still Fits: In listening to your Dad has heard, and what other GM's are saying, what are they telling you they like most about your game, and where do they think you need to improve?

Austin Daye: I think they really like my skill set and how it matches with my size. I've heard about the different matchups I can provide and create at my position, and my ability to get my own shot, and how I am crafty on the offensive end around the basket.

I hear a lot about my strength and toughness and how that needs to improve. I think in these workouts I have been able to show that I am tough and can compete against guys that will be in the NBA on a daily basis.

Slipper Still Fits: Has the injury scare that you had last summer had any impact on your decision, or is it something that you are trying to block out?

Austin Daye: It's definitely something you try to block out, but it's something you can't help but think about. It's not even like the big injuries, but even if you get hurt and just miss a couple of games, that can really hurt your draft stock. Even if you don't miss any games, if you have an injury that is nagging or affecting your game or how you play when you are option 1A, that can be a negative against you, and cause people to question you.

Slipper Still Fits: Having been at Gonzaga these past two years, what would you classify as your greatest memory or moment at GU? What type of team do you think Gonzaga would have if you were to return?

Austin Daye: Ya there have been some great moments. Meech hitting that shot at the end of the season would definitely have to be one. The game against Santa Clara my freshman year. That was definitely one of the craziest games I have ever been a part of at any level.  There have been lots of great games and moments.

I think if I came back, we would be the top team in the West, and by the end of one of the best in the nation. We all know each other and have played together for a long time, so we would be able to have our focus only on winning and being the best team possible. At the same time, I need to look at what is best for me and my future, and make sure that I am making the best possible choice.

Slipper Still Fits: Are there any teams that you have worked out for or have been in discussion with that you think are particularly interested, and that you think you would fit in with?

Austin Daye: It doesn't really matter how interested I am in a team, or how I think I would fit, the important thing is that they can see how I would fit in and that they are interested in me. They need to see if how I play, and the matchups that I could create, and what I could bring to the team, if that fits what they are looking for. I'm just trying to show what I am capable of, and what I can bring to a team.

Slipper Still Fits: At this point, are you leaning either way in terms of returning or staying in the draft, and do you plan to wait until the deadline to make your choice?

Austin Daye: I will definitely be waiting until the deadline. After my work out tomorrow, I am going to go home, and I am going to need the time to evaluate everything that teams are telling me, and I need to talk and think everything over. I also just wanted to thank the Gonzaga fans for all the support through this process and for waiting for my decision (laughs). I really just want to make sure that I have all the information and make the best decision possible for me and my future.