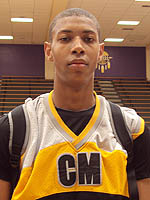 It looks like I may have written my 2010 prospect preview a little early, as it appears that the staff is in pursuit of another 2010 big. Richard Solomon is a 6'8 PF who plays for Bishop Montgomery in Torrance (CA). In reading just a couple of pieces about Solomon, I immediately get the image of a more talented and more developed Devonte Elliott. Solomon only weight about 200 pounds now, but apparently has tremendous bounce, and a tremendous work ethic to go with his talent.

Here is quick scouting report on Solomon from his most recent play at the Jayhawk Invitational last weekend.

The long, lean power forward runs the floor well, catches everything thrown his way and has nice touch around the basket. We especially liked his right jump hook on the left block, and that he’s able to step away from the basket and knock down jumpers. As he continues to develop, strength is something he’ll have to work out, but he’s got a motor and contests shots on the defensive end. Solomon already has high majors dabbling with him, and as the springs rolls on offers are sure to start rolling his way.

I also get a hint of Sam Dower from this report, and I love the potential that this kid seems to have. As for the competition that Gonzaga will face for Solomon, it appears that the PAC 10 is beginning to take some serious interest, as is the Big 12. Here is the list that Solomon rattled off in a recent interview.

"It’s been going pretty well, there’s been a little bit of everybody," said Solomon when asked which schools are recruiting him. "Like in the Pac 10 there’s been Oregon State, Washington State, Stanford, and Arizona State. In the ACC there’s Boston College. In the Big 10 there’s Minnesota and Michigan. Then there’s schools like Texas and Gonzaga, there’s a little bit of everybody."

As the summer begins, we will keep tabs on Solomon and his performance with the Compton Magic throughout the summer.