Share All sharing options for: Gonzaga Baseball Enters Their First NCAA Regional Since 1981

We don't pretend to be the biggest baseball buffs in the world here at Slipper Still Fits but since the Major League season seems to never end, we have soaked in a little bit of knowledge.  When I first arrived at Gonzaga four years ago as an undergrad, the baseball team was somewhat of an afterthought.  Heck, they didn't even play on campus at that time.  Now, four years and a beautiful baseball complex later, Gonzaga baseball is doing something it hasn't done in nearly three decades.  After sweeping Loyola Marymount in a best of three conference championship series, the Zags find themselves in the NCAA Tournament.  What makes it even sweeter is that they come into the regional as the 19th ranked team in the nation, their highest since the 1981 season when they were ranked 9th.  Now the Zags travel south to Fullerton, California where they face a relatively weak regional...except for the host team.  The Zags have to be a team that no one really wants to face right now, however.  Led by Ryan Wiegand and Tyson Van Winkle, the team is clicking on all cylinders offensively and their pitching has been equally impressive as well.

for a look at the Fullerton regional, keep reading after the jump...

If you have paid any attention to college baseball in the past decade or so, the one team you will recognize from this regional is Cal State-Fullerton.  The Titans are consistently one of the best teams in the nation and this year is no different.  At 42-14, Fullerton is undoubtedly the odds on favorite to come out of this region and eventually make it to Omaha for the World Series.  Because the regional is double elimination, the odds of major upsets happening in the initial rounds are unlikely.  This is obviously not to say that upsets are impossible (see Fresno State last year) but the likelihood of them happening is far less than in college basketball.

Gonzaga, although the 19th ranked team in the nation, enters this region as the three seed.  The remaining two teams in the region are the Utah Utes (4 seed) and Georgia Southern (2 seed) who the Zags take on first.  Georgia Southern has a very impressive record at 42-15 and won the Southern Conference (SoCon) tournament by defeating regular season champion Elon 7-3 in the championship.  2002 was the last time the Eagles of Georgia Southern won the SoCon tournament title.  Here is what Georgia Southern head coach Rodney Hennon had to say about Georgia Southern's two-seed in the Fullerton region:

"No, I don't think we expected to go that far. Typically, in years past, they have kind of regionalized the brackets, but I think what it shows is that they rewarded us, they felt like we were deserving of a two seed," said the 10th-year head coach. "I think it is exciting to play someone different and also to go somewhere different. So I think our kids are definitely excited about the opportunity to travel west. The only disappointing thing is that we have had such great support from our fans all year, I know it will be more of a challenge for a lot of our fans to get out there. But no question, I think our kids are excited about the opportunity."

Just like in college basketball, so much of the seed is about where it is located.  Traveling across the country and back three time zones will be difficult for Georgia Southern especially when you consider that Gonzaga is used to traveling to California for their West Coast Conference duties.  The Eagles will be rested I'm sure but you can bet that playing in California is not something they anticipated or wanted.

Here is a look at how the regional will play out, keep in mind that it is double-elimination. 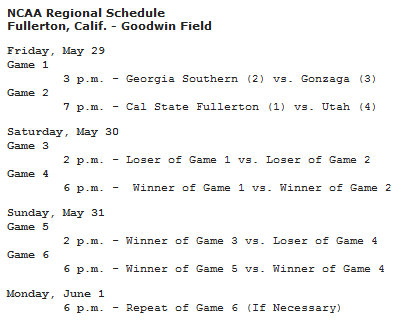 Expect Fullerton to be playing at 6 PM on Saturday, May 30th.  The Utah Utes are the only team in the field of 64 to enter the tournament with a losing record.  At 26-29, Utah battled their way into the tournament by getting hot late in the season and winning the Mountain West Conference tournament.  Not to take anything away from Utah, but I can't imagine them derailing Cal State-Fullerton and neither can ESPN's baseball analyst Jeremy Mills...in fact he can't imagine anyone in this region knocking off the vaunted Titans.  When asked about the tournament's easiest regional...

In stark contrast to their Orange County conference mates, Cal State Fullerton has an easy path to the CWS (and, inevitably, Omaha's staple ice cream and burger joint). Georgia Southern can rake, but winning 2,500 miles from home is difficult. Gonzaga returns to the tournament for the first time since 1991, so it's likely the Zags are just happy to be there. Utah got hot at the right time to win the MWC tournament, but the Utes are just 26-29 on the season.

Hopefully the Gonzaga baseball team can channel some of that old Gonzaga cinderella feeling as they head down to Fullerton.  Their is no question that the Zags are happy to be there but don't expect them to go down without a fight.  We will have a more in-depth breakdown of the regional in the coming days including a look at the Georgia Southern Eagles