Share All sharing options for: Reaction to ESPN Article on Austin Daye 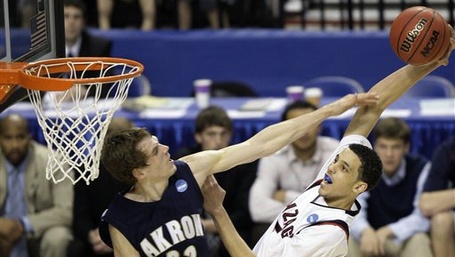 As some of you might have noticed, the topic of Austin Daye and the NBA draft is something that I am somewhat infatuated by. It seems everyday there is some sort of quote or video that causes me to change my opinion on what the future holds for Daye and Gonzaga. However, one of the best and most revealing interviews I have seen with Austin regarding the draft process was written by Andy Katz today, and had some quotes with some serious implications about what Austin might be thinking. The article is part of ESPN Insider, so instead of just posting the article, I decided to highlight some of the interesting quotes and dig for the deeper meaning of what Austin is implying.

If you are an ESPN Insider, click here to read the full article (Andy Katz story)

As the Katz article confirms, Austin will be having his first team workout on Sunday with the Phoenix Suns. Like I mentioned in my recent article regarding where Austin might be selected, Phoenix could be an excellent fit because of his offensive prowess. However, as Daye mentions, he has a lot to prove in these workouts.

The onus is on Daye to prove he can be a physical player. If he meets that challenge at stops like Phoenix, proves he is an exceptionally skilled player in front of NBA decision-makers in Chicago and does well during the strength and agility tests, then he may take the gamble and stay in the NBA draft, foregoing his final two seasons of college at Gonzaga.

"I definitely think I can prove that I'm one of the best players in the draft class,'' Daye said prior to his Phoenix workout. "I have to be that confident. I'll solidify my decision here soon.''

Consider me a little naive, but I'm not sure how Austin can exactly prove he can be a physical player in a 2 vs. 2 or 3 vs.3 setting. The real way to truly measure how tough I guy can be is to have him running off consecutive screens, and having him battle in the post for a tough rebound. These are aspects that can't be measured in a simple draft workout, but instead are revealed on two seasons worth of a tape. I have no doubt that Austin will absolutely blow teams away with his skill level and basketball intelligence, but I find it hard to believe that he will be able to demonstrate a substantial amount of toughness at these workouts. That's not meant to be a knock on Austin, but I just don't think this is the arena for him to demonstrate his toughness.

Daye, whose father Darren played for the Boston Celtics in the 1980s, said he understands if he goes in the first round, it would be as a mid to late pick. But that's actually what he is hoping for because he wants to be on a playoff team without the expectations to produce too early.

"If you go to a good organization, then there isn't a lot of weight on your shoulders to help the club win right away and be a star,'' Daye said. "You get better by playing against pros every day. You learn things that you don't know. It's a different experience than the college experience."

This was one of the most interesting aspects of the interview, as after reading this, it seems to me that Austin is as good as gone. I think his logic in this decision is 100% true, because Austin needs to be in a situation where he can develop his body and game before being thrust into a key role. Where I personally get conflicted is the last part of the quote, in which Austin says that you get better player pros every day. Part of me certainly believes that is true, and that Austin will be able to develop his game with highly skilled individuals with experience at the highest level. However, I think Austin must also realize that NBA practices do not focus on improving individual players. If Austin stays at Gonzaga, he will have the coaches working on his individual skills, while also continuing to teach him the basic fundamentals of basketball. At the NBA level, Austin will have assistant coaches helping him out, but practices will not be as intense, and the focus on fundamentals will be close to none.

Daye isn't closed to listening to the right people. He said if the general managers make it clear that he's a shaky first-round pick and that is conveyed to his father, then he would return to school.

But he knows he has to show he won't back down in a workout. "It's going to be a different type of atmosphere, in a two-on-two rather than a college game,'' Daye said. "I'm a tough kid. I don't shy away from anything, and I don't care who is in the workout.''

This is yet another quote where it seems that we have seen the last of Austin. What frustrates me so much about this is the fact that Austin is essentially settling for a lower draft position. Austin has the talent and attitude to take college basketball by storm next year, and be the star for this Gonzaga team. However, he is essentially willing to give that experience away to ride the pine in the NBA for his first two years, strictly because he is a 1st round pick. My belief on the draft is fairly simple, if you are a lottery pick, you go to the NBA no matter what year in school you are, or how much talent your school has returning. If this was the case with Austin, I would have no issues with what he is saying. What frustrates me is that while the 2010 draft will be strong, NBA teams will continue to covet a player with the size and skill of Austin. He could come back next year and put together an average season, and he would still be selected late in the 1st round. However, if he were to come back and dominate, his unique size and talent combination could move him up into the lottery.

What do you guys think of this article? There are certainly some interesting quotes throughout, and I do want to mention that Austin did say that he thinks that he would be coming back to a Gonzaga team with championship potential.

Daye said the positive of going back to Gonzaga is that it still gives him the chance to compete for a championship.

The window for the Zags' title run may have been last season with seniors Jeremy Pargo and Josh Heytvelt anchoring on the team with senior Micah Downs.

But Gonzaga's staff sees next season's team -- with Daye -- just as formidable. The staff looks at a potential lineup of Demetri Goodson at the point, Steven Gray and Matt Bouldin on the perimeter with Daye and Robert Sacre at the forward position as just as tough a scoring crew for opposing defenses.

However, I get the feeling that Austin is NBA bound. No one can blame the guy if he goes, because he is gaining financial stability for his family, while living out the dream of every basketball player in the world. I think the reason that I get frustrated is because I want to see Austin deliver on his tremendous potential at Gonzaga, and I think that he has the ability to lead the 2009/2010 team to some seriously lofty levels.