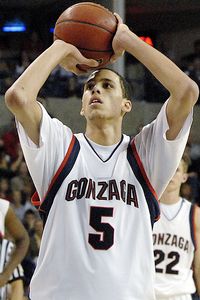 Since Austin Daye declared for the NBA Draft, we have done our best to report all quotes and stories that have mentioned Daye. In one of the recent quotes that we posted, Daye had this to say about what type of draft position it would take to keep him in the draft.

"I'm really just looking for positive feedback. If they can tell me they're going to take me pretty high ... maybe 13 to 23. If I can get in that range or even better ... it will put me in a position where I have to go because it would be such a good thing."

Now that the NBA draft lottery has happened, and we know what teams will be picking where, lets take a look at picks 13-23, and see what teams it would make sense for Austin to potentially be picked by, and also, where some of the top draft websites have Austin being selected. For this article, I will be using mock drafts from Chad Ford at ESPN, DraftExpress, and Ian Thomsen at CNNSI.

As you can see by the mock selections of the writers, Indiana is likely leaning towards an athletic guard to pair with Danny Granger and Troy Murphy. It appears that TJ Ford is not the answer at PG for the Pacers, which is why Jonny Flynn would make a lot of sense in this position. I think the real need for Indiana would be a big athletic center, but obviously there are not a lot of those available. As for Austin, he makes no sense at this selection, as he plays eh same position as Danny Granger, and Indiana is looking for a player that can come in and contribute immediately.

Chance Austin is selected by Indiana- 0%

Phoenix actually strikes me as a spot where Austin might be able to go. Both ESPN and DraftExpress like Earl Clark in this spot, and in my opinion, Clark and Daye offer the same sort of versatile offensive game. Phoenix tried to have a defensive focus this season, and it didn't work out at all. Assuming Alvin Gentry is the coach next season, Phoenix will continue the run and gun kind of offense. In Phoenix, Austin would be able to develop on the bench for a couple of seasons, He also has the offensive game that could potentially thrive in Phoenix.

Chance Austin is selected by Phoenix- 40%

Obviously, this is the first team that we have seen Austin linked to as a potential draft pick. Here is what Chad Ford had to say about Austin and this pick.

Analysis: The Pistons will begin their summer makeover in the draft. They'd love to add a dominant low-post scorer, particularly a center, but they aren't likely to find anyone who fits the bill.

Blair could fit because of his nastiness in the paint, but the Pistons just gave a similar player, Jason Maxiell, a big contract, and it's no secret that they are looking long and hard at Carlos Boozer and Paul Millsap, both of whom have the opportunity to leave Utah.

Daye could be the most talented player left on the board at this point. Adding him to the squad would be a move for the future, as he has the potential to be great someday. He has a pure game but needs to get stronger and more assertive.

While I generally agree with Chad Ford, I don't think Austin makes any sense hear. After drafting guys like Darko Milicic and Amir Johnson, and seeing these guys with supposed huge potential turn into busts, I think Joe Dumars is wary of taking another guys with loads of potential. As was shown with the success of Rodney Stuckey, I expect Dumars to pick a guy who can contribute immediately, and can play defense at a high level.

Chance Austin is selected by Detroit: 15%

This is another team where the current roster makes Austin seem like an unlikely pick. The Bulls already have Luol Deng under contract for the next 5 years, and appear likely to re-sign John Salmons. With those two guys locked in at SF, there is no reason for the Bulls to take Austin and develop him. Look for the Bulls to add depth in the frontcourt to go along with Noah, Miller, and Thomas.

Chance Austin is selected by Chicago: 0%

Much like the Bulls, Philadelphia already has their SF of the future in Thaddeus Young. Young played great during the playoffs, and with him and Speights as the future, Daye seems to make no sense at this position. I completely agree with ESPN and DraftExpress, and I think Philadelphia will ultimately choose between Maynor and Ty Lawson. With Andre Miller potentially on his way out of Philadelphia, the 76ers must address the PG position.

Chance Austin is selected by Philadelphia: 0%

We now have our second Austin Daye selection by our Mock draft writers. Here is what Ian Thomsen at CNNSI had to say about this selection.

If he stays in the draft, and if the Timberwolves don't package their three first-round picks in a larger trade, the promising Daye will supply shooting and length on the perimeter.

This pick really strikes me as a destination for Austin. With Mike Miller being a flop in the Twin Cities this season, and Corey Brewer being constantly injured, Minnesota might just take a chance on Austin here. I expect the T'Wolves to pick up James Harden at pick #6, and this could be the pick where they take a player for the future. If Mike Miller returns to form, Austin can have the chance to learn from him, and if Miller or Brewer struggle, Austin could see early playing time.

Chance Austin is selected by Minnesota: 60%

With so much money already invested in Josh Smith and Al Horford, I don't see Atlanta selecting Austin. Mike Bibby is starting to enter the twilight of his career, and Atlanta needs a PG of the future, as Acie Law IV does not appear to be the answer. There is also the potential of Josh Childress returning to the NBA next season, and Atlanta has the rights to his contract.

Chance Austin is selected by Atlanta: 5%

With all due respect to the people at DraftExpress, there is no way that Austin Daye ends up in Utah. The two things that have become the staple for the Utah Jazz under Jerry Sloan are defense and toughness. In case DraftExpress hasn't noticed, defense and toughness are not two adjectives normally associated with Austin. Utah will go for a bruiser in the post to replace the likely departing Carlos Boozer. Of all the teams that have been mentioned before, I think Utah is the least likely place for Austin to end up.

Chance Austin is selected by Utah: 0%

This is another pick where I think Austin makes a lot of sense. The Hornets are looking to trim salary and continue to build a young core around Chris Paul and David West. The Hornets currently rely on Rasual Butler, James Posey, and Peja Stojakovic for scoring and defense at the wing position. Austin would be an immediate upgrade over Rasual Butler, and could be the eventual replacement for Stojakovic. Austin has the scoring mentality to complement a great PG like Chris Paul, and could form part of a great nucleus down the line.

I go back and forth on whether this is a potential destination for Austin. I think that PG is a very logical pick here for Dallas, as they have no potential replacement for Jason Kidd. However, Dallas hasn't placed a huge premium on defense under Rick Carlisle, and Austin could fit in with the offense that Dallas runs. He could learn from another talented SF in Dirk Nowitzki, and potentially be the guy who replaces the German in Dallas. I don't think this would be the first choice for the Mavericks, as Mark Cuban wants to win now, but if they do elect to pick for the future, Austin could make sense.

Chance Austin is selected by Dallas: 40%

For Austin to be a viable selection at this pick, Sacramento must address its PG situation at #4. There has been some talk that the Kings are infatuated with Jrue Holiday and are considering taking him as high as #4. If the Kings do go PG, then a guy like Austin becomes a possibility. Sacramento has a solid frontcourt of the future with Jason Thompson and Spencer Hawes (I just threw up a little bit), but is certainly lacking at the SF position. The Kings can't continue to rely on Francisco Garcia and Andres Nocioni to play minutes at the SF position. However, I think the Kings will address that at the #4 pick, and then hope for a PG at #23. If the Kings do select Holiday or Flynn at #4, look for Austin to be in play with this pick.

Chance Austin is selected by Sacramento: 35%

What do you guys think of these percentages? Obviously, I think that Austin is going to be in the mix for teams like Minnesota and New Orleans, who both need youth and scoring from the SF position. It should be interesting to see how Austin does at some of the workouts over the next 2-3 weeks, as we approach the June 25th NBA Draft.