Share All sharing options for: The John Wall Effect

In case you didn't buy it when he was at Memphis, John Calipari is one hell of a good recruiter.  Last night, SLAM magazine reported that Coach Cal had landed everyone's favorite recruit John Wall.  Wall, who is ranked as the #1 prospect by Rivals.com has signed with Kentucky.  His signature wraps up what has quickly become one of the most impressive classes in the nation.  Wall joins a who's who of Rivals Top 100 players including Eric Bledsoe, DeMarcus Cousins, Daniel Orton, and Jon Hood.  Those five make up a lineup that could rival anyone else in the nation and when you think about adding Patrick Patterson and Jodie Meeks to the mix...it gets scary.  Jeff Goodman feels the same way with his most recent way-too-early Top 25: 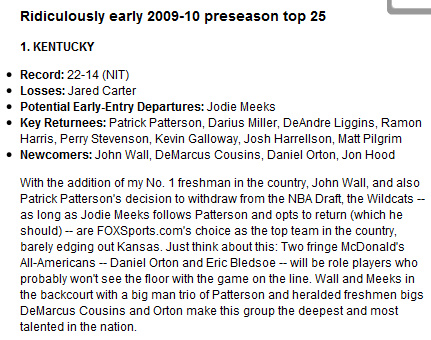 A few weeks ago everyone was crowning Kansas the national champs when Cole Aldrich and Sherron Collins decided to come back but Kentucky has now worked their way into the mix in a matter of weeks.  Kentucky may have swung and missed on Billy Gillespie but it's hard to imagine Calipari failing there if he keeps pulling this kind of talent.  Here is to hoping that Mark Few does not schedule them anytime soon!

Goodman has Gonzaga as the first team on the outside looking in at this point:

Just ahead of the Zags in Goodman's poll are UCLA, Siena, Cal, and Texas A&M.  I think that once Goodman sees or hears about the talent of Gonzaga's freshman class, he will return the Bulldogs to the Top 25.