2010 Updates: New Recruit and the Zags talk to Kirk

Share All sharing options for: 2010 Updates: New Recruit and the Zags talk to Kirk 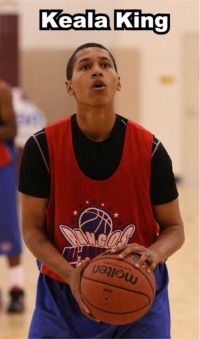 With coaches not allowed to go out and watch prospects until July, it's very difficult for them to scout and start to narrow down to a select few targets. Over the next couple of months, we will certainly hear lots of names floated around for the 2010 class, and because this is our favorite time of year, we will continue to get excited about every recruit who mentions Gonzaga.

The most recent recruit to mention Gonzaga is 6'5 SG Keala King. King intrigues me in many ways, mostly because of the fact that he has the versatility to play all three perimeter positions, and a tremendous passer. The one knock on King is that he tends to be over aggressive on the offensive end, and also isn't a consistent shooter at this point. I don't know if I am the only one who sees the similarities, but King reminds me a whole lot of Anthony Marshall. Here is what King had to say about the schools recruiting him during a recent interview with Scout.

I spoke with King recently and asked about the schools that have been in touch with him.

When I asked if any school stands out for him at the moment, King replied, "I like Stanford."

While he says that Stanford stands out at this point, he also indicates in the article that he is no rush to make his decision. I like King much more than Joe Harris at this point, because King plays against the top competition in the country at Dominguez high school. Here is a recent evaluation of King from the guys over at ESPN.

May, 2009: When King is focused (loses his composure) there are few players out west with his athleticism and skill. He can get his own shot at any time and his passing is high-level. In addition, he is one of the most efficient rebounders for his size. He attacks the offensive glass with reckless abandon and can finish with either hand. His jump shot, although not has consistent as you would like, has improved since the regular season. His release is solid, but his shot is a tad flat. King has the potential to be a top 50 player in the country, but that will depend on the continued improvement on his jump shot and staying focused on the task at hand on the court. 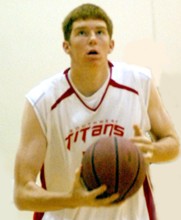 While it is always nice to have a new recruit on the radar, it's also refreshing to find a prospect that Gonzaga has been recruiting for quite a long time. Alex Kirk was one of the guys that I mentioned in my story on potential 2010 recruits (click here for story), and it seems like Gonzaga is continuing to show interest in the New Mexico native. There is no question that Kirk is the most coveted big man recruit on the Gonzaga radar, and he is a very strong offer list at this point, with schools like Vanderbilt, USC, and Washington. In his most recent interview with Scout, Kirk mentioned some of the schools that are recruiting him the hardest, and Gonzaga was one school he mentioned.

Kirk plays for his father and dad handles most of the recruiting calls. These days, they are plentiful. "The same ones that have been there the whole time," Kirk said of his interest. "The new ones have been Vanderbilt which offered and Kansas, Indiana, Minnesota has picked up a lot, Oklahoma State. I’ve been talking to UCLA quite a bit recently. Gonzaga’s been talking a lot too."

Kirk would be a tremendous recruit for the Zags, and I expect to see the staff put on the full court press over the summer. His size and skill set make him an ideal PF/C in the Gonzaga system, and I just get the feeling we will be hearing Kirk and Gonzaga in the same breath over the next couple of months.