We are truly pleased to bring you an exclusive interview with assistant coach Ray Giacoletti.  Coach Giacoletti came to Gonzaga after being head coach at the University of Utah and has really altered the mindset of Gonzaga basketball.  He places a strong emphasis on defense and it really came through last season as the Zags had one of the best defensive field goal percentages in the nation.  We would like to thank Coach Giacoletti for his honesty and openness that he displayed in this interview, and there is no doubt this is something that any Gonzaga fan will love to read.

Slipper Still Fits: In regards to last season, did you agree with the preseason expectations that this could have been a Final 4 team? Did the team meet the expectations that you and the rest of the coaching staff had?

Coach Giacoletti:  I think you always have huge expectations, but to talk about a final four, I think it gets a little bit out of whack but you try and be the best you can be.  We all have big expectations, no one more than Mark Few. You go in and try and be the best you can be, but talking about the Final Four and National Championships can be unrealistic. You just focus on what you can control because so many things in college basketball are not in your control.  You have to get so lucky to be playing your best basketball at that time of the year and not be injured, and not playing the eventual national champions.

continue reading more of our interview with Coach Giacoletti after the jump...

Slipper Still Fits: With the expectations seeming to rise every year in both the local and national media, do you believe that this program has the potential to make the elusive Final 4 and win a national championship?

Coach Giacoletti: I mean, I think you do the best you can do. It's hard to say, since I've only been here two years.  No one twelve years ago would have guessed what Mark could have created, so anything is possible.  He's the most positive guy I've met to keep believing and growing the program.  But you don't sit down and analyze all that, because recruiting is not black and white. Guys that you thought were going to be this or that do not work out at all.  That's why these recruiting services that rank so and so #2 in the nation have no basis, since it all depends on work ethic and seeing what happens four or five years down the line.  It's about people, players, and work ethic and what we need at that position.

Slipper Still Fits: Gonzaga fans were surprised with the recent news that GJ Vilarino was not only taking an official visit to Spokane, but also ended up committing. How did his recruitment start at the beginning of the month, and what was about him that had you so interested? 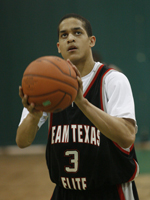 Coach Giacoletti: Well, with GJ, he was born in Spokane so he was a guy that had spent a year in Spokane, his mom was a big Gonzaga person and obviously with this being his place of birth, it's a place he has followed over the years.  And then they contacted us when he got out of his LOI at Kentucky.  He had four or five different people he wanted to talk to.  He committed so early that sometimes it's not good, and I'm not saying it was the case with GJ, but the process has gotten so moved along nowadays that it is nearly impossible to project how kids are going to be three years from now when they commit as freshman.  It worked out well for him because when Coach Gilespie was let go, he was let out and he has watched enough college basketball to know what would be a good fit.  That's the way it should be and it worked out.  We watched a lot of film and had him up for a weekend and he is a great young man and Meech knew him from Texas so that worked out.

Slipper Still Fits: Although he signed his LOI back in the fall, many Gonzaga fans still don't know much about Elias Harris. Do you feel that he can contribute immediately at a high level, and what type of competition does he face in Germany?

Coach Giacoletti: Yeah, it's a good question.  Elias is more mature than the normal freshman and he plays against men over there in Germany.  He's very explosive and athletic.  With those three things, it gives him a chance to play early, but again it depends on what happens when he gets on campus.  With all the freshman, the learning curve is great because they are going to be asked to defend and rebound more than most schools.  Each possession defensively and rebounding will be so crucial with these young guy

Slipper Still Fits: With the departure of the 5 seniors, and the arrival of virtually 7 freshman (including Andy and Grant in this group), who do you expect to step up and assume the leadership void?

Coach Giacoletti: I think it will be by committee.  It seems like each year a couple people emerge and possess those leadership qualities.  I think Matt Bouldin is the first guy who can do that. Matt is kind of the quiet leader and he will take the rein initially.  I'm sure there will be someone to emerge and help him with the vocal thing, but initially it will be Matt.

Slipper Still Fits: What strides have Andy and Grant made over the past year while they were redshirted. Do you expect significant contributions from either next year, and what do you think the future holds for both?

Coach Giacoletti: I think they are different because Grant was injured most the year.  He separated his shoulder and then had surgery and didn't start practicing until the NCAA tournament.  It was really unfortunate that during the school year he didn't get a chance to fulfill his growth during a redshirt year.  He's got a great feel for the game and has the whole summer to get more comfortable.

Andy made great strides.  He's not even the same guy he was when he came here.  I think he's up to around 240 pounds.  He used his redshirt to the fullest and is versatile and can do a bunch of things, and you can see him getting better when he goes along.  You can never really have enough skilled big guys.  He can face up and shoot it and play four or five.  He did a great job.

Coach Giacoletti: We are going to be young but I think that first group will at least be experienced.  Meech, Matt, and Steven on the perimeter have all played in really big games.  Three years with matt, two with Steve, and Meech with the year he had.  If we are fortunate enough for Austin to come back we are looking at another guy that's been around two years, and Rob started mostly every game his freshman year.  It makes it easier for the guys off the bench because they won't be forced to take over the game and make a huge impact.  It's a lot to ask but they will all have good leaders in front of them and they will get better by having those kind of players in front of them.  The competition will make them better I think.

Slipper Still Fits: Since the beginning of this terrific run, Gonzaga has had the approach of playing anyone, anywhere. Is it difficult to find the line between that attitude and wearing the team down with travel? Also, how difficult is it to get a high major program to play at the MAC?

Coach Giacoletti: I'm not really involved a whole lot in the scheduling and I know Mark plays anyone, anywhere.  I know a big part of the future is to get the high profile games in the MAC.  In the past, we've got them to Seattle or to the Arena.  That's something I don't really have a great big handle on because Mark, Coach Krause, and Mike Roth have more of a handle on that.