Share All sharing options for: Visitor on Campus: Aaron Bright 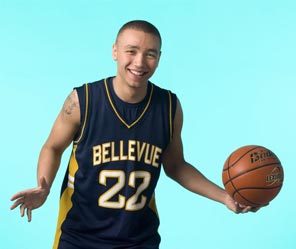 With the recruiting season officially in full swing, it appears that the Gonzaga coaches are wasting no time making an impression with some of the top prospects in the class of 2010.

While many coaches are out recruiting at open gyms this weekend, the Gonzaga coaches were instead welcoming 2010 prospect Aaron Bright for an unofficial visit. The 5'11 Bright is arguably one of the top 5 prospects in the state of Washington, and was spectacular for Bellevue high school this season. We were able to catch a glimpse of Bright and his mother on campus, and he was being shown around by Coach Giacoletti and Coach Rice.

I have long believed that the 2010 class will be comprised of two guards and a true center. Landing Bright would be monumental for Gonzaga, as he fits in perfectly with the Gonzaga offense, and his game might remind some of Derek Raivio. Here is a quote from Bright on his interest in Gonzaga, and how he would fit into the offense.

I have been watching Mark Few at Gonzaga and I like that they are a run and gun team. I like Jeremy Pargo and I try to model my game after him. I like how they spread the ball and move it around."

Bright is the #74 recruit in the country according to Rivals, and really impressed the people there with his terrific play in the Maxpreps Holiday Classic this past December. Bright led Bellevue to the championship at this presitgious tournament, and was named tournament MVP.

Two well-coached and hard-playing squads in Bellevue (Wash.) and Rialto (Calif.) Eisenhower locked horns in the final of the Maxpreps Holiday Classic. Led by the 18 points of tournament MVP Aaron Bright, Bellevue outlasted Eisenhower 58-54. Just as important as his scoring, Bright's defense held Creighton signee and fan favorite Andrew Bock to only nine points after he had lit up Jeremy Tyler's squad for 26 points the night before.

Put Bright and Bock in the same category as prospects who will be doubted because of height or size. But the fact is that both are high-major-level winners. Creighton has something special in Bock, and whichever high-major steps up with an offer and gets Bright will be very glad it did.