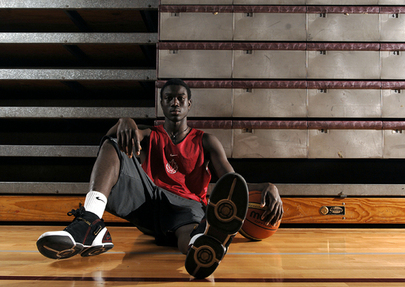 One of the most important and vital aspects of recruiting for college coaches in any sport is the development of a pipeline. This essentially means that a coaching staff forms a consistent stream of recruits from one school or one area to their school. A terrific example of this would be the pipeline from Laurinburg Prep to Memphis when John Calipari was the coach. Over the past few years, Laurinburg has sent Joey Dorsey, Antonio Anderson, and Robert Dozier to Memphis. These three formed the core of the Tigers terrific Final 4 team. In the case of Gonzaga, it appears that the Zags are slowly starting to from a recruiting pipeline from our neighbors to the north. With Rob Sacre arriving in 2007 and the subsequent arrival of Mangisto Arop, Bol Kong, and Kelly Olynyk this year, Gonzaga is becoming a prominent stop for the top talent in Canada. Perhaps the most decorated member of this 2009 recruiting class is Mangisto Arop, whose family hails from Sudan, but was raised in Canada.

To be completely honest, its truly a blessing that Gonzaga fans will have the opportunity to watch Manny these next 4 years. As GU fans have learned from the Bol Kong situation, it's certainly no guarantee that anyone born in Sudan will be granted a Visa to enter the United States.

When ‘Manny’ was a toddler, he and his family trekked hundreds of kilometres over desert sand to reach Kenya where they
settled for about eight years.

“I don’t remember much about it, but it wasn’t easy,” said Arop, 17, of life in Africa before his mother, Angelina, emigrated to Canada in 2000 with her five sons.

It's a tribute to Manny that he was able to survive gruesome and tough circumstances to develop into one of the top recruits in this class. After seeing Manny play only once, Rivals decided that he was the #80 recruit in the entire class. Arop has a terrific blend of athleticism and natural talent which has allowed him to develop into a tremendous basketball player. On the offensive end, Manny is at his best when he is slashing to the hoop. He has terrific explosiveness off the dribble, and from the few times I have seen him play, he is nearly unstoppable when he gets into the lane. Manny is also blessed with terrific leaping ability, which allows him to finish with authority at the rim. At this point, Arop is a streaky shooter. I saw him play a couple of times this Summer and the first thing I noticed was the tremendous lift he gets on his jumper. Obviously, Arop will have the coaches working with him on his shooting, and by the time he is a sophomore or junior, he could be nearly unstoppable on the offensive end.

While Manny has the potential to be a great offensive weapon, he is already a dominant defender. He uses his great athleticism and length to be a shutdown defender. Arop does a terrific job of reading the passing lanes, and has a unique ability to anticipate a pass and jump the lane. Because of his terrific length and athleticism, Manny is a truly elite rebounder for his size. Although he is only 6'5, Manny was the second leading rebounder at the FIBA U-18 tournament (10.2 rebounds per game) and the leading rebounder at the Albert Schweitzer tournament (11.3 rpg). These are numbers that you rarely see from a player who spend the entire game playing either SG or SF.

One advantage that Manny has over nearly every recruit in this entire class is the quality of competition that he has faced over the past two years. While representing Canada at the U-18 level, Manny burst on to the scene at the Albert Schweiitzer tournament in Germany.  In leading Canada to a surprising 5th place finish, Manny averaged 20.5 ppg and 11.3 rpg. It's important to realize that this tournament featured some of the top U-18 talent in the entire world. Even more impressive was the performance of Arop at the FIBA U-18 tournament. Although Manny averaged 17.0 points and 10.2 boards, it was his terrific performance against Team USA that established him as one of the top prospects on the continent. Going up against the likes of Kemba Walker, Malcolm Lee, and JaMychal Green, Arop scored 21 points and grabbed 9 rebounds in the 82-66 loss. His terrific performance earned him praise from Team USA head coach Bob McKillop.

Canada had a great performance by Mangisto Arop. He was tremendous today. It was very difficult to defend him, but I think we had enough guys that defended him and made it difficult for him down the stretch.

Manny also earned praise from of the top prospects of Team USA:

Mangisto Arop got hot there for awhile, he was killing us for awhile. But then we picked up the 'D' and started getting more stops.

With almost unlimited potential, and a terrific work ethic, it's clear why Mark Few is so excited for Arop to arrive on campus. However, Manny will not be arriving with the rest of the recruits, as he will be competing in the FIBA U-19 tournament from July 2-12. This will provide Manny with another terrific opportunity to test himself against the best young talent in the world. However, when Arop finally does arrive, Gonzaga will be welcoming potentially it's best defensive prospect of the past 10 years. Manny will almost certainly see 10-15 minutes a game next season because of his game changing athleticism and defensive abilities. However, once Manny realizes his full potential on the offensive end, he has All-WCC, and even All-American potential.