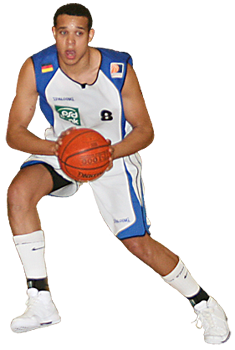 As I sit here watching Michigan St. play UConn in the Final 4, the pain of the North Carolina loss continues to linger. The most frustrating aspect of this Final 4 is the fact that I genuinely believe that Gonzaga is a better team then both Michigan St and Villanova, and clearly in the same league as UConn. Instead of focusing on the season that is now in the past, The Slipper Still Fits is moving on to next season. Starting today, we will be profiling and examining each player that will be on the 2009/2010 roster. For some of the guys (Gibbs, Poling, Harris, and Kong) we simply dont have much more information then the few highlights we have seen, and what we have heard through the grapevine. However, we think that these breakdowns will provide everyone with a solid understanding of what to expect from the 2009/2010 Zags. With all that said, here is the first of a 13 part series, and today the focus will be on Elias Harris.

We started hearing rumors about a European prospect that had committed before the season had even started, but we had an incredibly difficult time trying to track down a name. However, when the WCC released its list of LOI's signed during the early signing period, the mystery man was revealed. While there is not a lot of information available on Elias Harris, the few things we have heard and read indicate that Tommy Lloyd has found another great player from across the pond.

The 6'8 Harris should be expected to play a hybrid wing/forward role during his time at Gonzaga. After seeing Harris in person before and during the Memphis game, I can assure that Harris is a legit 6'8 appears to have a strong build. I'm sure this is a music to the ears of many Gonzaga fans who have longed for a strong post threat, similar to Ronny Turiaf.

When I first began researching Harris for this breakdown, I came away a little disappointed by the evaluations from both DraftExpress and NBADraft, but then I realized that these evaluations were done in 2007. As I began to try and find more recent stats and opinions on Harris, it became clear that his game has evolved dramatically over the past 2 years, and that he has begun to fulfill much of the potential that these evaluations cite. Since these evaluations were written, Harris has emerged as the top player for hie club team in Germany, as well as a key member of the German U20 National Team.

In 23 games for BIS Speyer, Harris is leading the team in both points and rebounds, as he is averaging 20.4 ppg and 9.1 rebounds for Speyer. Although Speyer has struggled in the German B league, Harris has been recognized as one of the top players in the league, evidenced by him being named Youngster of the Month in January. Because of the lack of athleticism on his team, Harris has been forced to play both on the perimeter and in the post this season, but it appears that he has the athleticism and length to guard on the perimeter.

In looking at his stats on a game-by-game basis (click here to see stats), it's clear that Harris is an outstanding finisher around the hoop. When he focuses on scoring around the hoop, Harris is nearly unstoppable, as over his past 5 games, he has made 39/58 shots from inside the arc. Where Harris gets in trouble is when he settles for shooting from outside. Harris shoots only 23.7% from behind the three point line, but it seems to me that he forces shots from deep due to the relative lack of talent surrounding him. I think being surrounded by more talented and more capable guys will allow for Harris to focus primarily on his post game, while occasionally shooting from distance to keep the defense guessing.

The more I read about Elias, the more it seems that he could come in and make a big impact. Harris will be much more physically mature then most freshman, as he will be 20 by the time he plays his first game at Gonzaga. Harris has competed against grown man for the past couple of seasons, and this will surely give him an advantage as he transitions to the NCAA level. I don't expect Harris to come in start, but I really think he might provide some truly valuable minutes off the bench as an energy guy for the Zags. Although he is coming in as a mystery to many Gonzaga fans, I think Harris will be a household name for Gonzaga fans by WCC play.