How will the Scholarships Work?

Share All sharing options for: How will the Scholarships Work? 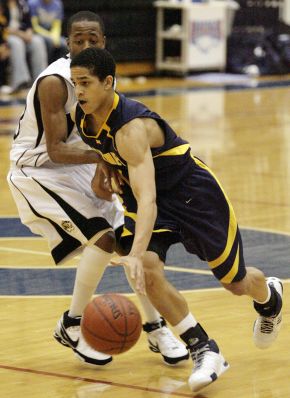 While Gonzaga fans have been gripped and excited about the recent commitment of GJ Vilarino, one of the main questions revolves around how the scholarship situation will work out, and what impact it will have on future recruiting. It's pretty clear how high the staff is on GJ, as there is the potential need to shuffle scholarships if Austin Daye returns to school. At this point, this is how the Gonzaga scholarship situation looks:

This leaves the Zags one over the scholarship limit, and this obviously needs to change before next season. The other impact that this will clearly have is on how the Zags will recruit the next two years.

There are two fairly simple ways for the scholarship issue to be resolved, although from what I understand, neither appears that likely. The obvious way that this is resolved is by having Austin Daye remain in the NBA draft. This would open up a scholarship for GJ, and eliminate any issues with scholarships. However, while I have assumed and many others have as well, that Austin was as good as gone, it might not be that set in the stone. Perhaps Austin has indeed heard the rumblings around the NBA that he needs to put on strength and prove himself to be a true #1 option at the college level. Obviously, if Austin is a lottery pick, then there is no reason for him to return to schools. However, if he is projected as a pick in the late 20's, then maybe he returns to school and proves that he is the #1 option that everyone thinks he could be. While this is speculation, I wouldn't necessarily consider Austin as gone as many people do. With the potential that Austin has as the focal point in the offense next season, there is no chance that the staff would give away his scholarship as long as there was still the possibility he could return.

The other option that would open up the scholarship for GJ is the arrival of Bol Kong is back in question. While this is a possibility based on the troubles he has had over the past two years, it is my understanding that Bol will be on campus in May, and that nothing with his status has changed. Bol is a special talent, and as long as there is the expectation that he will be here, there is no way that the staff would give away his opening.

This obviously leaves Gonzaga with the reality that if Austin returns, and Bol arrives on campus as scheduled, then somebody will have to lose their scholarship. I understand that this may be a tough reality for people to wrap their minds around, but a scholarship is a one year contract between the team and the player. Therefore, if the Gonzaga staff feels that the team will be better off next season with a certain player not returning at the expense of an incoming recruit, then they certainly have the right to make a change. This is not unprecedented in recent Gonzaga history, as Mamery Diallo and Calum Macleod did not feature at Gonzaga, and went and pursued their careers elsewhere. While I don't want to speculate on  who the player may be, I think it is something that we might see when the rosters are released next season, or perhaps some rumblings come out over the summer. However, this must occur if Austin returns and Bol makes his expected arrival in the States.

Tomorrow we will examine what impact Vilarino will have on the approach to recruting for Gonzaga in both 2010 and 2011. With limited scholarships to give out in each of the next two years, you better believe that the coaching staff will be aiming high for some of the top talent in the country.