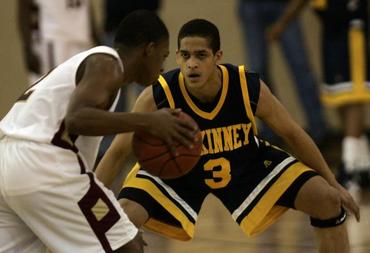 Well, it's too hard to avoid the rumor mill that has begun stirring in the past few hours.  As we reported a few days ago, former Kentucky commit G.J. Vilarino visited Gonzaga this past weekend.  Reports have begun to surface claiming that G.J. will be committing to Gonzaga tomorrow and will become the sixth member of the 2009 recruiting class.  If the reports are true, Gonzaga will have secured an elite point guard which fills a future need.  Currently, Demetri Goodson is the only pure point guard on the Gonzaga roster and Vilarino would give Mark Few a little added insurance at the position while Meech takes the reins.  Learning from Goodson should bode well for G.J. as he will be able to see what a player similar to him can do within the boundaries of the Mark Few offense and by the time his career is done at Gonzaga, I truly think we could be looking at an exceptional guard.

We'll wait until the news becomes official to begin wondering what this means as far as playing time, scholarships, etc etc. We are keeping our fingers crossed that the news is true.  Vilarino has a wealth of upside and is a player that could develop into an oustanding guard for this program.