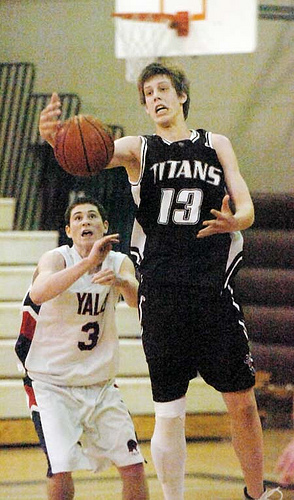 When you are dealing with 17 and 18 year old kids, there is rarely a player that can be considered a sure thing. Often times, coaches will take a chance on a recruit that is a little under the radar with the hope that he will develop into something special. This can be an enormously risky move, because if a player doesn't develop or reach his potential, then a coach has essentially wasted a scholarship. However, when one of these recruits does blossom into a special talent, it can change the course of the program. In Kelly Olynyk, the Gonzaga coaching staff is taking an inherent risk on a 6'10 G/F who has put up some incredible stats over the past year, but has played against some truly terrible competition. There is no denying the skills and abilities that Kelly possesses, but the question remains whether his athleticism and talent is enough to shine against DI competition.

When I first heard the news that Kelly Olynyk committed in late January, I had a serious mix of emotions. While I was excited about the news that the Zags had picked up another commitment for the 2009 class, I was personally hoping that the player would be Victor Rudd. One of the complaints that we have seen voiced on this blog over the past year by many of our readers is the lack of toughness exhibited by the most recent Gonzaga basketball teams. Toughness is not an attribute that Kelly Olynyk will ever bring to the table, as he is much more of a finesse type basketball player. Check out this report from Slipper Still Fits member IslandZag after watching Kelly play

In the game I saw in which they lost he played the entire first half with his hands at his side on defence allowing his team to be outscored by 24 points. He was often the last up the court on either side. This was a semi final game and was the most important of his life with 3,000 or so fans in attendance so effort was not a factor.

Obviously I don't possess the same passion and excitement for Kelly that I do for the rest of the class, but there is no denying the production he had this past year. Kelly scored 54 points in a game this January, and averaged around 35 points and 13 rebounds this season. Olynyk raised his game to an even higher level at the BC championships, where he scored 100 points and grabbed 47 rebounds in only 3 games. No matter what the level of competition he plays against is, these are incredibly impressive stats, and they demonstrate the versatility and scoring ability of Kelly.

As I mentioned before, my main issue stems from the competition that Kelly plays against. Guys like Sam Dower with Osseo and Manny Arop with NEDA have played against and been successful against some of the best competition that can be found. For example, at the FIBA tournament this past summer, Olynyk scored only 9 points in 68 minutes of action. While this is only one example, it worries me to see how much Olynyk's statistics struggled when he faced off against the elite competition. Gonzaga fans shouldn't expect Olynyk to come in and contribute immediately, mostly because of his lack of foot speed and strength. These are certainly things that can be improved through a redshirt year and work with the Gonzaga trainers. However, I remain skeptical that Olynyk's skill set will ever translate to this level. Hopefully Kelly proves me wrong, but at this point, I am not holding my breath.