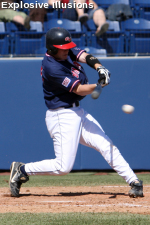 Tonight's game between Gonzaga and Washington State appeared to be headed for a nine inning shootout.  Both teams exploded in the third inning with the Cougars of Washington State putting up four runs in the top half only to see it exceeded by Gonzaga's five run bottom half.  Their were four home runs hit in the third inning, three of them by WSU batters.  While they put on a show at Patterson Baseball Complex, they could not keep it going and they would only score two more runs the rest of the game, losing to Gonzaga 17-6.

The Zags, who are now 24-10, continued to play excellent offensive baseball tonight as they built up an astonishing 23 hits.  Leading the way for the Bulldogs were the usual suspects.  Catcher Tyson Van Winkle had one of the better nights of his career, going 5-5 at the plate with two doubles and six RBIs.  Seniors Ryan Wiegand and Evan Wells each chipped in with three hits of their own on the way to a blowout victory.  Wells also scored three times, and had a double and a stolen base.  It was also a huge night for junior left fielder Mark Castellitto.  The Poway, California native wowed the crowd with a home run and finished the game going 4-5 from the plate with four RBIs.  Sophomore Reedy Berg got the start at pitcher for the Zags tonight but struggled in his five innings of work, giving up four earned runs but he got some help from the bullpen.  Ryan Carpenter came in for two innings and allowed two runs but that cleared the way for sophomore Cody Martin who demolished the Cougs with two scoreless innings which included four strikeouts.

Next up for the Zags is a road series with the 18-16 Pilots of Portland.  First game is on Friday at 3 PM.