First of all, apologies for the lack of material the past few days. The Easter holiday consumed both of us but we are back and should have plenty for you this week. Starting now and continuing for the next few weeks, we are going to do a little retrospective on the season that was. There were a lot of highlights, and yes, their was the lowlight that was December. We hope you enjoy. 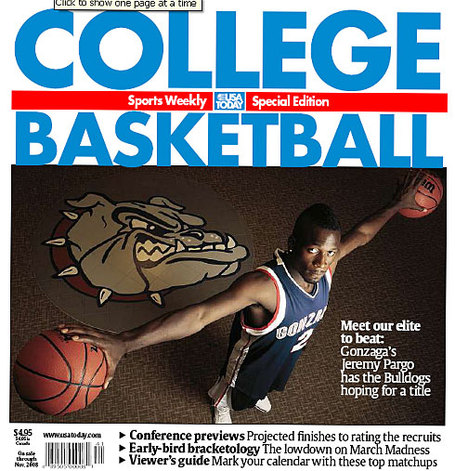 When Casey Calvary tipped in Quentin Hall's running layup in the 1999 Sweet Sixteen to give Gonzaga the victory over Florida, the Zags became a Cinderella. Since then, Gonzaga has established itself as a perennial tournament team but no Gonzaga team had commanded as much preseason hype as the 2008 version. For most power teams like North Carolina, Duke, and UCLA, the hype is nothing new but for the Zags it was pretty foreign. The hype landed Jeremy Pargo on the cover of USA Today's College Basketball Preview (above) in which the Zags were named as one of the eight elite teams to beat this season. If you are a Gonzaga fan, the fall seemed to be stretched by a few months thanks to all the hype. It's a blast for bloggers like us and is something that we hope to see more and more of on a consistent basis.

Whether or not you like all the preseason chatter or not, there is no avoiding it. ESPN has made it so that there is no chance for you to escape prognostication. Just look at all the preseason polls that are already coming out right for the 2009-2010 season. Last year was the same and most of those early polls featured Gonzaga and the talk never died. For example, here is one of the first way-too-early predictions before the 2008-2009 season done by FoxSports.com's Jeff Goodman:

2007-08 Resume: 25-8, lost to Davidson in 1st round of the NCAA tournament
Declared: Jeremy Pargo
Likely Early Departure: None
Jeremy Pargo will test the draft waters, but it's likely that he will return to Spokane next season. If he does, the 'Zags wil return nearly their entire team — starting guards Matt Bouldin and Pargo as well as big man Josh Heytvelt and Austin Daye. Toss in Micah Downs and give big-time shooter Steven Gray a full season, and Mark Few's team has all the pieces to be among the nation's elite next season.

Just to give Mr. Goodman some credit and to prove that these early rankings are not totally bogus, look at his top two teams, North Carolina and Michigan State as well as UConn at number three. Pretty impressive. Goodman's description of Gonzaga was basically echoed by every other major pundit all the way up until the start of the season. The theme was: Pargo and Bouldin will be solid, Heytvelt and Daye are the X-factors and Gonzaga has some solid role players in Gray and Downs.

Now to the opposite end of the spectrum with Andy Katz, who actually really struggled in his way-too-early predictions but slated Gonzaga at 11. He, like Goodman had an excellent viewpoint on Gonzaga and we saw some of things come to fruition this season. Katz broke teams down by Why? and Why Not? Here was his major knock on the Zags coming into '08 (Katz wound up ranking Gonzaga seventh right before the season started).

Why not? This particular Zags group still hasn't gotten over the hump against high-profile teams out of the WCC. Sure, the Zags did beat Connecticut in Boston, but the Zags need to prove yet again that they can take out the top teams on the slate to feel good about advancing in the NCAAs.

Gonzaga, although one of those favorite Cinderella teams of the nation, had become a novelty act in the NCAA Tournament. Gonzaga had not made a run since Adam Morrison's junior year and the UCLA game that all of Spokane is still trying to get over. Quite honestly, it seemed like a majority of college basketball fans were starting to get sick of Gonzaga and was getting bored of them. Katz hits the nail on the head with his caveat of believing in Gonzaga and that is that they are the big dog in the WCC but are largely exposed against the best of the best. What happened this year? Zero wins against teams that finished in the top-25. Thanks Tennessee!

The hype didn't just stop with the team. Individual Zags were getting absolutely lauded by the press. The most exciting, at least in my opinion, was Gary Parrish's individual player rankings before the season started. Parrish, who is one of our favorite national bloggers, pegged Josh Heytvelt, Matt Bouldin, Jeremy Pargo, and Austin Daye as some of the top players at their respective positions. Parrish had Pargo as the 10th best point/combo guard in the nation and he also had Austin Daye as the 10th best wing in the nation. Bouldin checked in as the 38th best point/combo guard in the nation and Heytvelt was ranked as the 27th best big men in the nation. Those two may have actually exceeded Parrish's expectations, Heytvelt especially.

Austin Daye especially carried a bunch of hype on his slender shoulders. The biggest accolade that Daye received before the season started was handed out by The Sporting News which slated Daye as a First Team All-American. TSN said that Daye would be joined by Blake Griffin, James Harden, Stephen Curry, and Tyler Hansbrough. They were 4/5 as sadly Daye could not match the lofty expectations that they had for him. There is no doubt that Daye is the most scrutinized member of the Gonzaga Bulldogs team. Everyone assumed that he would leave for the NBA as soon as he was assured he would be in the lottery. Daye was called "the most skilled 6'10'' player in the country" by SI.com's Luke Winn and was the odds on favorite to win the West Coast Conference Player of the Year.

Here is a great piece done by Sports Illustrated in November of this year about what pro scouts had to say about Daye and the hype that he had to deal with, pretty crazy looking back on it all.

"I see something of Danny Manning in him. I never thought of Manning as a super-quick high flyer, and this kid isn't either. But Daye is very cerebral, he cuts without the ball, he's long, he makes shots and he has all of that skill. Plus, he plays on a Gonzaga team that is loaded with multiple players, so people will be seeing a lot of him this year.

So was the hype a negative on Gonzaga's 2008-2009 performance? You'll never see me argue that because I don't think that Mark Few could care less about what a bunch of magazines are saying. It's pretty obvious that the hype was a major storyline for last season. There wasn't a preseason poll out there with Gonzaga much lower than 10 or 15 in the nation. Their quick and decisive romp in the Old Spice Classic only magnified the hype even further. Don't expect to see all the crazy hype for Gonzaga next year. The Zags basically have eight newcomers (I'm counting Sacre) in Arop, Dower, Kong, Harris, Olynyk, Gibbs, Poling, and Sacre. There is no doubt that those eight have the chance to get the same kind of hype that the 2008-2009 guys had, it also helps that guys like Matt Bouldin, Austin Daye, and Steven Gray will be around to teach them that the hype means nothing if you can't sustain a solid performance day in, day out.