Zags Blow By Broncos, Gaels Next

Share All sharing options for: Zags Blow By Broncos, Gaels Next 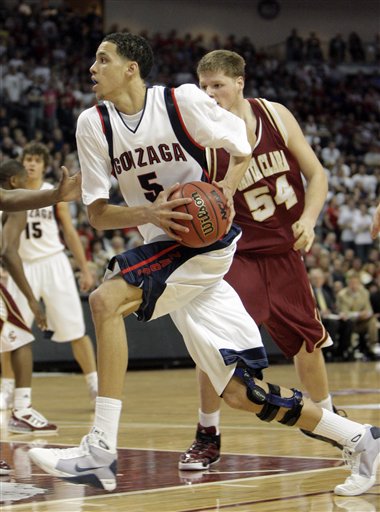 As good as Gonzaga has been at times this season, the all-around performance of the Zags last night was some of the best forty minutes of basketball this season for this team.  In the Orleans Arena last night, Mark Few's team was relentless and never let up, even when the game was well in hand.  Led by a career high performance from Austin Daye, the Zags cruised past Santa Clara 94-59.  Along with Daye, four other Zags were in double figures including senior wing Micah Downs who had 18 points on 7-9 shooting.

It was just one of those games where everything seemed to be getting better and better.  The one player that I'm sure most people will look at and wonder what happened last night was Josh Heytvelt but he had a huge impact on the game even though he only wound up with three points.  Heytvelt was the ring leader of the amazing defensive effort by this team and they played suffocating defense on the Broncos.  WCC Player of the Year John Bryant was frustrated the entire night and he did not get on the board until midway through the first half.  The length of Gonzaga has constantly frustrated him this season as he has never really seemed comfortable although putting up some decent stats.  There's no doubt that Heytvelt and the rest of the team wanted to make a major statement against the "best" player in the WCC this season.

In regards to the NCAA Tournament and the greater picture, this game has to be just what the doctor ordered for Gonzaga.  It wasn't just about Austin Daye scoring at will or Micah Downs turning in a complete performance.  Looking at the stats, Matt Bouldin was not too far away from a triple-double.  He finished with 11 points, 8 rebounds, and 7 assists.  We saw some of this last year where Matt became the prime distributor when Jeremy Pargo took the more agressive role over.  Pargo did just that last night.  I've been guilty of questioning the play of Jeremy and his ability to lead a team but last night he was phenomenal.  He made some huge shots for Gonzaga when the game was still tight and his three-point shot is looking about as good as it ever has.

The last thing that must be talked about is the chemistry that was present on the court last night.  Even though the game was outstanding, there were a few not so good moments including a Pargo rim-check and a between the legs pass from Austin Daye that was about ten feet off target.  The Zags did not let anything get to them last night, however, and were just having fun on the court.  It was just really fun to see this team when they are put under pressure and prove to be very resilient.  In college basketball, the main thing is just to get in the tournament and try and play your best basketball come March and Gonzaga looks to be in complete control right now.  We'll find out a lot more tonight as the Zags take on St. Mary's but as we stand now, the Zags are in control of their fate and if they take care of business, a high seed is in the cards.