Quick Primer for the WCC Tournament

Share All sharing options for: Quick Primer for the WCC Tournament 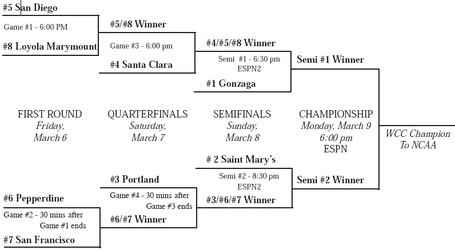 It's hard to believe that postseason play begins tomorrow for the West Coast Conference.  After a very odd year, even by WCC standards, the top of the conference looks the way most people thought it would at the start of the season.  Gonzaga continued their dominance over the conference with a 14-0 record and St. Marys, despite losing Patty Mills, battled back to overcome Portland and take the #2 spot which gives them a two game bye.  Don't expect too much from the low seeds in the conference tournament.  The bottom half of the conference has proven to be quite terrible and I would not be surprised at all if we had no upsets throughout the entire tournament.

continue reading after the jump for a few things to watch for in Las Vegas...

If you find yourself watching one non-Gonzaga game in this tournament it should be...  Santa Clara and San Diego possibly matching up in the second round of the tournament.  While I think neither of these teams will really have any sort of impact on the outcome of the tourney, I could see this being one of the better games to watch.  The Broncos feature conference player of the year John Bryant and the Toreros still have the talent to pull the upset and make it all the way to the third round despite being without their star player Brandon Johnson.  Gyno Pomare and De'Jon Jackson are two players that are good enough to take down John Bryant and Santa Clara and Bill Grier is still one of the best coaches on the West Coast.  I'd be very surprised if this wasn't a great game.

Three players to watch that aren't getting the attention they deserve...

Prediction Time:  The first round match up should be a cake walk for USD and I also like Pepperdine behind Keion Bell and Mychel Thompson to defeat the Dons.  In the second round, I think Bill Grier and the Toreros pull it off.  They've been struggling but they know how to play in the postseason as we saw first hand last year and I think they pull the upset.  No chance for the Waves however, as Portland easily rolls over them.  The top two seeds at this point are just light years ahead of the competition right now and they should easily cruise to the championship on Monday.  While I have gone back and forth on who would win this game if Patty Mills was healthy, I have to predict that Gonzaga takes down the Gaels to win the automatic bid from the WCC.  Mills is a gamer but with the injury that he suffered, I don't think he will be ready to blow up against the Zags so quickly.  The game will be close which could be enough for St. Mary's to sneak in the tournament as an at-large but overall, Gonzaga just has too much.