Need Some Reasons Why Tony Bennett and Virginia Makes Sense?

Share All sharing options for: Need Some Reasons Why Tony Bennett and Virginia Makes Sense? 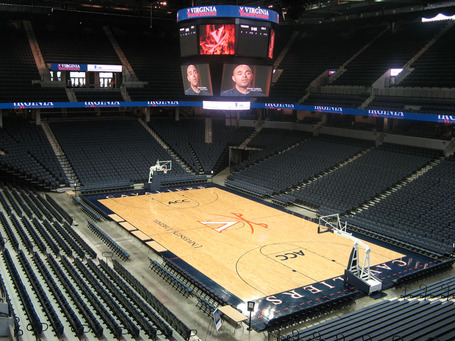 Typically we don't really pay much attention to the coaching carousel, mostly because we are trying to keep everyone away from our coach but the news about Tony Bennett leaving Washington State was so intriguing that it deserves a little more insight.  Ever since the news broke I have been addicted to two sites, CougCenter and Cougfan.  Both are fan sties that get plenty of traffic and are obviously being swallowed up by what can best be described as unbridled disgust and confusion.

The news may be terrible for Pullman and maybe even the state of Washington but there are a number of reasons why this move makes tons of sense.

Personally, when I first heard the news, I was a little bit surprised but it is just nearly impossible for me to be surprised about a coach bailing on his school for greener pastures.  As far as the 'greener pastures' comment is concerned, yes Virginia is a step up and if you want proof of that just look at the picture above.  There are so many positives to the Virginia position.  First and foremost is the fact that they play in the ACC and that comes with a number of benefits.  Year in, year out it is right up there with the Big East for the best conference in college basketball.  The big kicker and the first thing I thought of when I heard the news was exposure.  The ACC has a tremendous television contract which splits time between ESPN and FSN.  While Pac-10 fans can argue that they are also on FSN, everyone knows that the ACC dominates Sunday Night hoops on FSN and ESPN gives them a ton of press as well, mostly because of Dick Vitale.  They also play in the much-watched ACC/Big Ten tournament which is covered by ESPN.  I think even Tony Bennett will be surprised how much press Virginia get even though they have not excelled in recent years.

The next thing that you get with Virginia is a top-flight institution that, for lack of a better word, is rich.  Just browsing the internet and looking at their website and wikipedia, it's pretty clear that Virginia may be a public university, but it doesn't have that sort of feel.  It is one of the best public schools in the nation and is consistently ranked at the top of the list as far as best values, best public schools etc etc by a number of outlets.  Since it is such a tremendous academic institution, it means that they have more money to spend on their athletics.  They don't shy away from this and the number one example if their new basketball facility that was constructed in 2006.  The John Paul Jones Arena is a 16,000 seat gymnasium that could be confused for an NBA Arena that is dressed up in an architectural wonder.  The gym was constructed with the whole "Jeffersonian" pillar look and it is probably the most beautiful gym I've seen.  Here is a little sneak peek of the architecture but by all means, Google it and enjoy.

The gym and the TV contract are cool but that doesn't mean Virginia is a good basketball program.  Yes, they are coming off a tough season but look at Virginia's location.  They are smack-dab in the middle of one of the best recruiting hubs in the nation and the state of Virginia produces some of the best high-school basketball prospects each and every year.  Long story short, when you combine and young and energetic coach with a school that has everything to offer, you could be looking at a very good future.  Bennett will have tons of talent right in his backyard and if he has to, he can travel a few states over or across and find some great talent.  The Seattle area and the state of Washington in general produces nice talent but Bennett had to battle two great recruiters in Mark Few and Lorenzo Romar each and every year.  Now he will have to battle guys like Coach K and Roy Williams but with the way that Bennett has developed talent at WSU, I don't think he will mind.

Let me just say that this is horrible news for the current players of WSU and the incoming recruits.  I'm aware that Tony Bennett always maintained that he was extremely committed to WSU.  Does Bennett deserve to be public enemy number one in the Pullman area right now? Probably but sometimes, coaches are selfish and it wasn't the first time something like this happened, and it sure as hell will not be the last time either.  There is still a chance that Tony arrive on campus at Virginia and realize he made a huge mistake but for right now, it makes a lot of sense, at least to me.