Share All sharing options for: Zags Dominate in an Emotional Senior Night 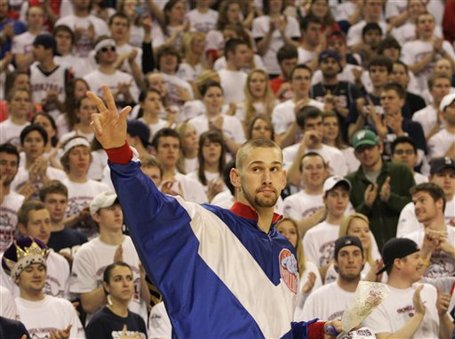 It was everything the departing seniors could have asked for and more.  Five Gonzaga Bulldogs played their last game in McCarthey Athletic Center tonight and they will all leave Gonzaga with some fond memories of their home court.  Andrew Sorenson will remember his very well as his most outstanding performance came on his senior night and it is something that he does not plan on forgetting for quite some time.

"This is going to be a long-told story, my kids are going to get sick of it." Sorenson said after the game.

Sorenson, who walked on to the team after spending his first year at Gonzaga as a member of the Kennel Club, finished his final game with a career high 15 points on 5-11 shooting as Gonzaga defeated South Carolina Upstate tonight 90-40 in Spokane.  Even though Matt Bouldin was the high point scorer tonight with 16, the night belonged to the five seniors that the Spokane community said goodbye to.  Sorenson started the game along with seniors Jeremy Pargo, Micah Downs, Ira Brown, and Josh Heytvelt and each one of them were praised throughout the night.  All five were accompanied at the game by family members or close friends and were sent off the court at the end of the game with a rousing standing ovation from the 6,000 that were in attendance.

continue reading after the jump for more about senior night...

In games like these, where it is pretty obvious from the outset that it is not going to be competitive, the players get a chance to have fun on the court and the seniors took advantage of it.  Jeremy Pargo seemed like a different player tonight as he played without any sort of worry or pressure and he finished his regular season career nicely with eight points and seven assists.  Josh Heytvelt started the game at his usual torrid pace as he connected on a number of jumpers and finished with 12 points and eight rebounds.  Micah Downs made sure to get plenty of shots in during his final game and finished 5-16 from the field with 11 points.  Even Ira Brown, who is known as more of a glue players that does a lot of the intangibles, scored seven points and pulled down six rebounds.

The Zags did a great job creating havoc against the significantly over matched Spartans.  All in all, the team forced 26 turnovers.  Matt Bouldin led the charge, stealing the ball five times for USC-Upstate.  Each senior got in on the act as well, with each having 2 steals.  Gonzaga, on the other hand, only turned the ball over four times and had no trouble carving up the Spartan defense.

Don't get confused, USC-Upstate was probably one of the worst teams to ever grace the McCarthey Athletic Center and that is saying something with some of the teams that have made their way to Spokane.  There is not a whole lot to take from this game besides the fact that it was an excellent way to send of a great senior class that has given so much to the university.  The Zags will have to strap it on for real less than a week from now as the West Coast Conference Tournament just got a lot more difficult with the re-emergence of Patty Mills.

We won't see Gonzaga again until Sunday in the WCC Tournament semifinals as they have clinched a two game bye in the tournament.  The likely opponent will be the Santa Clara Broncos, who tout conference player of the year John Bryant.