Moving on to 2010: LaBradford Franklin

Share All sharing options for: Moving on to 2010: LaBradford Franklin 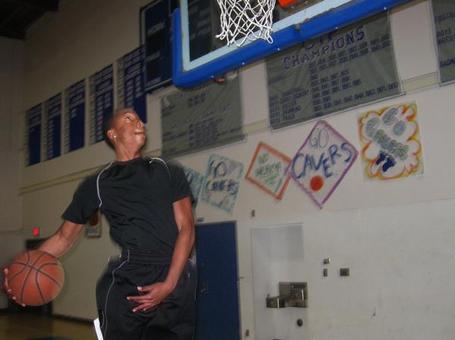 With the 2009 season officially over, it's time for The Slipper Still Fits to return to its roots. As crazy as it may sound, I get almost as excited about the recruiting period as I do about the season itself. The thrill of following prospective Gonzaga recruits as they compete against the top prospects in the country makes the summer an incredibly interesting time.

We will be kicking off our coverage of the 2010 recruiting class with a feature on LaBradford Franklin. With Jeremy Pargo graduating this year, and Matt Bouldin leaving next season, it's clear that the PG position will be a priority for the coaching staff. In LaBradford Franklin, the Gonzaga coaches are targeting one of the top pure PG's on the West Coast. Franklin is a terrific outside shooter, and as you will read in our interview, a savvy floor general.

In order to learn more about LaBradford, we decided to pick the mind of Justin Walsh. Walsh is a writer for Slam Magazine, and wrote this tremendous piece on LaBradford back in December (Click here to read). The Slipper Still Fits would like to thank Justin for his terrific help with this interview, and I'm sure that Gonzaga fans are about to find a new favorite recruit for the 2010 class.

Slipper Still Fits:  Due to the fact that he was declared ineligbile by the CIF, what has LaBradford been doing the past 6 months in terms of playing competitive basketball at a high level? What AAU team does LaBradford play with?

Justin Walsh:  The situation with the CIF is something you need to consider very carefully for more than one reason. First off, LaBradford was in all reality declared ineligible not because of anything he did, but because the other transfers were accused of having their AAU coach talk with San Diego's head coach. I know for a fact that LaBradford was going to transfer to San Diego High School far before the coach in question was involved with any of SDHS' transfers for this year. Basically, a coach in the LA area got an ESPNU Top 100 recruit (Terrence Boyd) to transfer to SDHS (previously, Boyd had been at Oak Hill, then transferred out and stayed home in Oklahoma the next year, so he hadn't played basketball for two years) but that's neither here nor there. Basically, LaBradford got lumped in with the other transfers at SDHS and CIF decided all the transfers must have been a packaged deal between that AAU coach (which for the record, LaBradford did not play for) and the SDHS coach who recently got fired. So in essence, all the SDHS transfers were benched for "undue pressure". In other words, that whole "Public schools shouldn't be able to recruit players." I think the scouts in the SoCal area said it best "When San Diego has Jeremy Tyler, the top big man in his class, you don't need to recruit to get players to go there- they will get recruits on reputation alone." Now, when we talk about whether or not Franklin will play for San Diego, LaBradford just informed me that he is eligible to play next season for the Cavers. Also, LaBradford will be once again playing for the premier AAU program in the west coast, Belmont Shores. Coached by one of the most experienced (and connected for that matter) men in the AAU circuits, Dinos Trigonis, Franklin should benefit greatly from this pairing. Belmont Shores has a deep alumni that includes Demar Derozan, Brandon Jennings, Jamal Boykin of Cal, Jordan Wilkes of Cal, Tito Maddox (played on the Rockets for a stint) of Fresno State, Casey Jacobsen, Dijon Thompson, Trevor Ariza, Kirk Snyder, Hassan Adams, Demarcus Nelson... The list goes on, but it gives you an idea of the caliber of players that Belmont produces on a regular basis.

Slipper Still Fits:  At this point, what would you consider LaBradford's greatest strength on the court to be? What area of his game do you think he needs to improve the most?

Justin Walsh:  At this point in Franklin's basketball progression as a whole, I think his best attribute mentally is his ability to limit turnovers when running the offense, and his ability to shoot the basketball. The entire time at the Pangos All-West Camp over the summer, as well as the Pangos All-American Camp, he held his own with all the top guards in attendance, with exception to John Wall (but nobody played to his level at that time, you can hardly make that a negative). He also showed a very surprising ability to make the right decisions in the half court- in transition, all guards at the major camps can throw oops, sling bounce passes across to the open man, flick back to the trailer... But in half court, you really see LaBradford shine. He knows where his passes need to go in relation to the defender (for instance, many a time, a recruit will see his post man sealing the defender with his hand out where he wants the ball & the PG will lazily pass it anywhere in the vacinity. Franklin zips it right where the post makes the target), he also has the rare attribute for a high school kid for knowing when to shoot the basketball. His jump shot from the trifecta is probably his best tangible talent in basketball- he has solid fundamental technique (Similar in style to Gonzaga Alum Derek Raivio, with a release not as fast, but it could be by the time he gets to the college ranks). Not surprisingly, his biggest area for improvement is a need to have better lateral quickness on defense. I think with another good season in the AAU circuits this summer, he can make the necessary strides in that area.

Slipper Still Fits:  Do you think that LaBradford will be able to compete for immediate playing time at the DI level as a freshman? 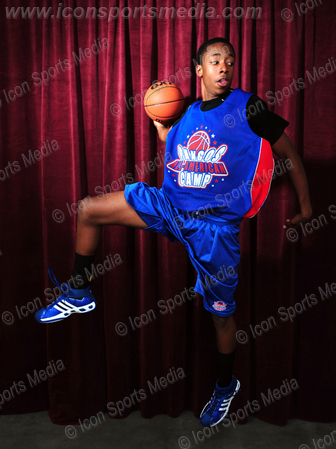 Justin Walsh:  LaBradford should be able to compete for freshman playing time at the D1 level. Let's look at Gonzaga just for a hypothetical example. By the time LB becomes a freshman (let's hypothetically say he's a Bulldog for the purposes of this discussion), the starting PG will be a Junior Demitri Goodson, Stephen Gray will be the senior Gonzaga star for the Bulldogs at the SG spot (assuming he stays for his senior year, which I think he will just by the progression of his career thus far), with most of their commits in this upcoming class being post men and SF swingmen, I think it's realistic to say that LaBradford could have a similar role that Goodson had this year for the Bulldogs in backing up Pargo- 15 minutes or so per game. Their roles in comparison would be different in terms of what they bring to the offense, Goodson is a very slippery guard who loves taking it to the rack, a solid kick out to the perimeter PG. LaBradford would be more of a perimeter oriented PG, but their roles in terms of how much responsibility they had in the offense would be similar in my view. Of course, this is all hypothetical based on the linchpin that LB attends Gonzaga, but I figured it would be fitting considering this site probably wants to know how he'd be at Gonzaga. But to compare it in a comparison across the country, look at Justin Hawkins who will be attending UNLV in the fall- very cerebral, solid basketball player. His impact will be similar.

Slipper Still Fits:  What schools have been showing the most interest in LaBradford, and do you know if any have offered yet?

Justin Walsh:  LaBradford has gotten letters and/or serious interest from Gonzaga, San Diego State, San Diego, Pepperdine, Boston, Oregon State, San Jose State, Arizona, Notre Dame, Yale, Stanford, Washington State, Brown and a good number of smaller schools. The ones who have offered are San Diego State, San Diego, San Jose State, Pepperdine, Boston, Yale, Columbia. The other schools, including Gonzaga are going to be watching LaBradford's play in this AAU season. I have seen the Gonzaga recruit list, LaBradford is a recruit they are seriously considering along with 3 other guards. My honest opinion is that part of the reason Oregon State, Arizona, Notre Dame and Gonzaga haven't offered full rides yet is to see how Franklin reacts after the CIF ruling.  More about Gonzaga in particular in your next question.

Slipper Still Fits:  What interest has Gonzaga shown in LaBradford, and do you know how interested he is in Gonzaga?

Justin Walsh:  Gonzaga is very interested in Franklin, and like I stated in the previous section, they will be watching him closely this AAU year.  From a recruiting standpoint, the CIF ruling probably slowed down the process of Franklin receiving more full ride offers. But with LaBradford Franklin playing for the best AAU program in the west coast (Belmont Shores), it's not a stretch to think more D1 programs will follow suit with the 7 aforementioned that have already offered Franklin. As for LB's interest in Gonzaga, he told me he thinks he and his family will take an unofficial sometime in the near future, and that Gonzaga is his number one interest in terms of where he wants to play & attend university (he's serious about school, 3.8 GPA). "Their style fits me, I really like the way Coach Few handles things, he's a very good coach."

Slipper Still Fits:  Where would you compare LaBradford among the other terrific guards in Southern California this year?

Justin Walsh:  I wont compare LB to PG's outside of his class, that's just not fair at this point, so I'll stick to the class of 2010. I'd say from a PG standpoint, he's just a shade behind Mater Dei PG Gary Franklin. (ESPN has Gary ranked as a 95, he's probably not at that level in my evaluations. I'd rate Gary as an 91, and I have LaBradford at an 86.  ESPN's scouts haven't been out to enough west coast events to accurately evaluate the west coast players outside of the TOP at each position. This is true of Rivals, Scout & a few other recruiting services.) So I think he's one of the top 5-7 PG's on the west coast for the class of 2010.