Share All sharing options for: Know Your Enemy Part 2

SB Nation has a number of great college blogs that we are proud to be associated with and one such example is Carolina March which does a tremendous job at covering the ins and outs of the North Carolina program.  Although they will be our enemy later today, they were kind enough to answer some questions for us about the North Carolina program.  We hope you enjoy their answers and make sure to check out their blog as they have tremendous insight to the game as well! 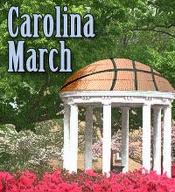 Slipper Still Fits:  The last time these two programs played was in 2006 at the Preseason NIT. Although many of the players are the same, what similarities and difference are there between the UNC team that season, and the one that Gonzaga will play on Friday?

Carolina March:  The biggest difference is experience. UNC was starting two freshmen and two sophomores for the game, the fourth of the season. Ty Lawson hadn't won the starting job yet, Danny Green played all of eleven minutes, and Tyler Hansbrough hadn't yet gelled with the incoming class of freshmen big men. (His five shots would be the fewest he'd attempt for his career until the injury-shortened games this fall.)  You'll see the same faces from that game, (minus a few lost to the pros) but they'll be entirely different players.

SSF:  While there is no denying the great talent that UNC has in its starting 5, how strong is the depth for the Tar Heels off the bench?

CM:  Not as strong as in years past, but good. Ed Davis has really come into his own in the last few weeks, and Frasor and Larry Drew give the Heels a lot of depth at point guard. They won't bring the same burst of speed Lawson does to the floor, of course,  but they're tenacious defenders. Through in Tyler Zeller, and you're going to need at least seven, maybe eight quality players to keep up with Carolina's pace or you'll go the way of a lot of other opponents and collapse down the stretch.

SSF:  What is the perception of the Gonzaga program among North Carolina fans and throughout ACC country?

CM:  We're aware of their existence, but they don't really break into the consciousness until NCAA tournament time. Nothing against the Zags, but everyone's very focused on the ACC race in February.

continue reading after the jump for more of our interview with Carolina March...

SSF:  Are there any similarities or common themes among the Tar Heels 4 losses this year? Do you think there is a recipe to beating this team?

CM:  All four teams had a truly excellent guard (Tyrese Rice, Jeff Teague, Greivis Vasquez, or Toney Douglas) who could both drive and shoot the three; the other commonality is good interior defense - three of the four losses coincide with three of the four games with the most blocked shots against the Heels - and cold three-point shooting from Carolina. So shut down UNC in all aspects of their offense and have a playmaker handle the ball and you should be OK.

SSF:  Based on what you saw against LSU and late in the ACC season, how healthy do you think Ty Lawson is, and how much of an impact has the injury had on his play?

CM:  He was in a lot of pain during the LSU game, and spent a fair amount of time on the bench being tended to, so he's nowhere near a hundred percent. The unfortunate thing for you guys is that 60% of Ty Lawson is still very, very good. As long as he's not forced to carry the team, he'll be fine.

SSF:  How much of an impact has the suspension of Will Graves and the injury to Marcus Ginyard had on this team?

CM:  Will Graves, not so much. He plyed a little more than ten minutes a game, and was a capable pair of fresh legs, but nothing spectacular.  As for Ginyard, his absence is generally thought to account for the drop in Carolina's defensive efficiency this season I also think it may explain their trouble getting the ball into Hansbrough this season, but that's just me. In the last month, though, I think UNC has reached the level they would have for the season with Ginyard healthy.

SSF:  Based on what you know about both teams, what is your prediction for the game on Friday?

CM:  Gonzaga's interior defense prowess is troubling, and they're built in a way that has definitely tripped the Heels up this season. That being said, they've more than a few of their games against top-flight competition, and too many Carolina players have too much to prove to lose in the Sweet Sixteen. Gonzaga won't have the depth to keep up with the Tar Heels' pace, and they'll pull away in the last eight minutes for a ten point victory.