Thoughts on the Opening Weekend: Where is the Madness?

Share All sharing options for: Thoughts on the Opening Weekend: Where is the Madness? 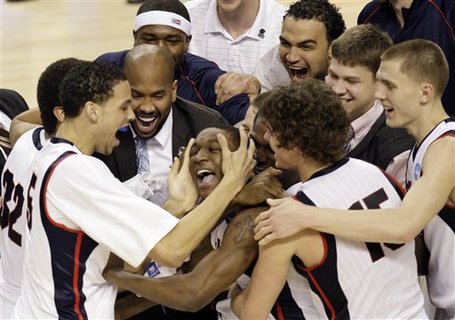 The most appealing aspect of the NCAA Tournament is the fact that it is a fantastic opportunity for the small schools to prove they belong against the top competition in the country. It's teams like Davidson, Butler, Kent St., Southern Illinois, and Gonzaga, who over the years have made this the greatest sporting month of the year. However, when you look at the Sweet 16 this year, you will see a bracket that is lacking in upsets, but is heavy in quality.

While many fans and talking heads on TV have bemoaned the lack of upsets, I actually think it should provide for one of the better Sweet 16/ Elite 8 weekends in the past 10 years. With the higher seeds advancing, we truly have the best teams in college basketball matching up with one another this weekend. If you look at just the South Region, you have mouth watering games like UNC vs. Gonzaga and Syracuse vs. Oklahoma. No offense to LSU or Michigan, but I don't remember being more excited for two games in a long time.

So while it appears that Cinderella will not be making an appearance this March, here are my highlights and lowlights from the first weekend.

Most Impressive Team: Although I still don't think this team has what it takes to win 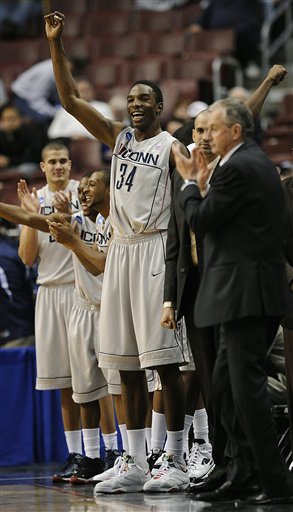 the National Championship, the UConn Huskies were clearly the most impressive team of the first weekend. While both Louisville and Pitt struggled in their first round games, UConn wiped the court with Chattanooga. It was much of the same in the second round, when the Huskies dominated every aspect of the game in a 92-66 win over Texas A&M. I fully expect UConn to scrape by Purdue, but I'm not sure they can handle the length and athleticism of Memphis.

Biggest Letdown: Maybe I was incredibly naive, but I truly believed that Wake Forest had the talent and athleticism to make a run to the Final 4. In fact, in my bracket, I had the Deamon Deacons taking down Louisville in the Sweet 16. Therefore, you can imagine how upset and stunned I was as I followed the score of the game between Wake Forest and Cleveland St. How does a team with Jeff Teague and James Johnson get so totally dominated in a game of that magnitude? While I considered Cleveland St. to be one of the most dangerous match ups of the first round, I thought that being paired with Wake Forest would be a nightmare for the Vikings. Perhaps I should have remembered that Wake Forest is typically one of the biggest underachievers in the NCAA Tournament.

Best Individual Performance: I know it shouldn't be a surprise that the best performance in the NCAA Tournament came from a guy who scored 60 points in a game earlier this year, but I couldn't help but impressed by Ben Woodside of North Dakota St. Woodside scored 37 points in the 84-74 loss to Kansas. While Woodside is obviously a terrific scorer, it was so impressive to see him dominate offensively against the defending champions.

Best Games of the Weekend: My top 3 games of the weekend were Siena vs. Ohio St., Wisconsin vs. Florida St., and Gonzaga vs. WKU. I am particularly fond of the first two, since I picked the winner of both in my bracket. However, the contrast of styles between Wisconsin and Florida St. was truly something to behold, as was Bo Ryan's tremendous defensive coaching job on Tony Douglas. The clutch shots in the Siena win were something to behold, and Siena certainly made their fans proud with the great effort against Louisville in the Round of 32. However, the best game of the first weekend was played by the Zags. I don't know how it was watching it on TV, but the energy and excitement throughout the Rose Garden was unforgettable. The sense of "UCLA part 2" among the Gonzaga fans was evident, and the jubilation when Meech hit his shot was brilliant.

Picks for Thursday/Friday (minus Gonzaga vs. North Carolina pick): I expect to see the following 7 teams in the Elite 8: Louisville, Kansas, UConn, Memphis, Syracuse, Villanova, and Pitt.