Zags vs. Hilltoppers: A trip to the Sweet 16

Share All sharing options for: Zags vs. Hilltoppers: A trip to the Sweet 16 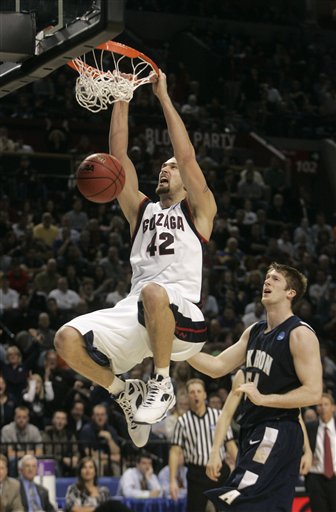 After the past couple of NCAA Tournament performances, I'm sure many Gonzaga fans were elated with simply advancing beyond the first round of the NCAA Tournament. While the win over Akron wasn't easy on the eyes, all that matters is that the Zags survived to play another day. Their opponent tonight will be another mid-major that has developed quite the reputation for pulling off monumental upsets. The Hilltoppers are looking to advance to the Sweet 16 for the second straight season, although this year is a much different cast. After losing head coach Darrin Horn to South Carolina, and Courtney Lee and Tyrone Brazelton to graduation, many people assumed this season would be a huge step back. However, Ken McDonald has done a tremendous job in his first season as a head coach, and has relied on the strong guard play of A.J. Slaughter and Orlando Mendez-Valdez to have WKU dancing again.

I'm not sure any WKU fan could have predicted that the Hilltoppers would be in this position after blowout losses to Murray St., Evansville, and Mississippi St. at the start of the season. However, after back-to-back losses to Mississippi St. and Florida International in early January, WKU really found their stride. The Hilltoppers have won 17 of 19, and have an athletic and quick starting lineup that uses pressure defense to create turnovers.

WKU is led by the terrific A.J. Slaughter, who is one of the few returning contributors from last season. Slaughter was the leading scorer for the Hilltoppers this season, as he averaged 15.8 points and 3.6 assists. Slaughter is not a terrific shooter, but uses his great quickness to attack the rim and create opportunities for his fellow guards. He shares the backcourt with Orlando Mendez-Valdez, who is a tremendous shooter from beyond the arc. Mendez hits over 40% of his three point shots, including 3 threes against Illinois on Thursday.

One area where the Hilltoppers struggle is in the paint. The leading post threat for WKU is Sergio Kerusch, who leads the team with 7.5 rebounds per game, despite only being 6'5. The other post threat for WKU is Jeremy Evans, who is a super athletic 6'9 forward. Evans averages 8.7 points and 5.7 rebounds per game, but has an offensive game that is strictly limited to dunks and put backs.

While WKU has put together a truly special season, it's important to remember that they played an over-seeded Illinois team in the 1st round, who was missing their starting PG. Gonzaga has the length and athleticism on the frontline to totally dominate WKU on the boards and in the paint. I believe that we will see the Gonzaga team from the final 10 minutes of the Akron game for a full 40 minutes. If Gonzaga comes out and plays to their potential from the start, this will not be a close game. Behind dominate performances from Josh Heytvelt and Austin Daye, Gonzaga will advance to the Sweet 16 with the 86-64 victory.