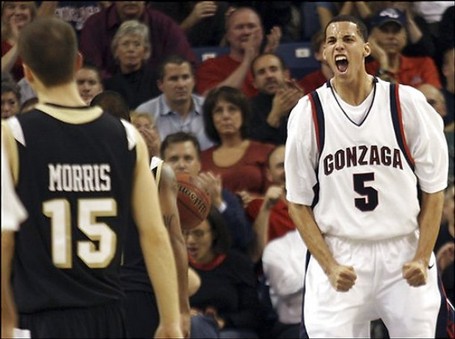 It's hard to believe that this tremendous regular season is coming to its conclusion. It seems like yesterday that the Zags were celebrating a championship performance in the Old Spice Classic. However, tomorrow night will mark the end of a terrific regular season, which has seen the Zags go undefeated in WCC play and earn a top 15 ranking. Tomorrow will mark the final appearance at the MAC for Micah Downs, Jeremy Pargo, Josh Heytvelt, Ira Brown, and Andrew Sorensen. No matter how frustrated some fans have been with the performance of the seniors, it's important to remember the impact that some of these guys have had on this program, and even more importantly, the impact that Gonzaga has had on them. It will be bittersweet seeing these guys play their final home games, but each has left a truly defined mark on the Gonzaga program, and I can assure that they have not yet left their greatest mark on Gonzaga.

The opponent in the finale will be none other than the USC Upstate Spartans. This game presents the Zags with an opportunity to send the seniors out in style, but it might provide the Spartans with a little more.

Upstate’s athletics department will receive about $70,000 for the trip. That’s how much Gonzaga was willing to pay for a game in which to stay sharp during the week between the regular season and the West Coast Conference tournament.

USC Upstate is currently in the process of transitioning to the DI level, and still has three years to go before they are a fully fledged member. However, this is not a terrible team, as the Spartans have gone 9-11 since an 0-9 start, which featured losses to Notre Dame, South Carolina, and Boston College. USC Upstate has gone 8-12 in the Atlantic Sun conference, and has an impressive win over conference champion Jacksonville in the Dolphins home gym.

Leading the way for the Spartans is Bobby Davis. The 6'6 PF is the leading scorer and rebounder for the team, as he averages 14.6 points and 9.1 rebounds per game. Davis is coming off a special performance against Mercer, when he played all 45 minutes in the overtime victory. Davis scored 33 points and grabbed 11 boards in the win.

Another player to keep an eye on is Nick Schneiders, who is truly one of the more physically imposing specimens in college basketball. The 7'3 German doesn't have tremendous stats (9.6 points and 6 rebounds), but he has blocked 7 shots in each of the last two games. Schneiders should provide an interesting match up for Josh Heytvelt, and it will be fun to see how Heytvelt attacks Schneiders on the offensive end.

Make no mistake, this game is on the schedule to provide the Zags with a game between the end of the regular season and the semifinal round of the WCC tournament. This should be a tremendous send off for this great group of seniors, and it should be a tremendous show for all the fans at the MAC. I expect vintage performances from Jeremy Pargo and Josh Heytvelt in the 88-57 victory.