Akron: Who are the Zips?

Share All sharing options for: Akron: Who are the Zips? 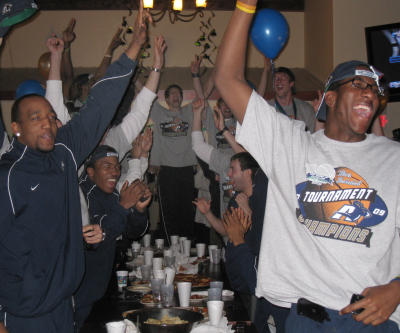 When I was watching the NCAA Tournament selection show, the two teams that I really wanted to avoid were VCU and Cleveland St. I had read up on both squads, as they were each opponents in numerous pre tournament brackets, and I genuinely admit that both teams made me nervous. However, once both Cleveland St. and VCU had been paired with other teams, I sat back and began to think who the Zags could possibly be matched with. When it was finally announced that the Zags would be meeting Akron in Portland, I didn't know how to react, since I knew literally nothing about the Zips. After a couple days worth of research and reading up on the Akron Zips, here is the primer for all Gonzaga fans.

The Zips have had a very inconsistent season, as they have looked fantastic at times, and dismal at others. While losses to Pitt, Dayton, and VCU are nothing to be embarrassed about, the youth of this team was on display as they dropped games to Valpo, Northern Illinois and Ohio throughout the season. Most of the inconsistency can be attributed to the youth of this team. The lineup is dominated by sophomores and juniors, and the only senior that sees serious playing time is Nate Linhart. To be totally honest, it seems that this team peaked in late January and early February, when Akron won 7 straight games. Following the winning streak, the Zips split their final 6 games in the regular season, but were able to find the right chemistry to win 4 straight games in the MAC tournament. The run to the championship was nearly over in the first round, as the Zips needed a basket with less than a second left from Brett McKnight to defeat Toledo.

One thing that really jumps out about the Zips is the depth that they have. On any given night, Akron can go 9-10 guys deep, with very even playing time for each guy. This shows that while Akron does not have a superstar, they do have exceptional depth, and a handful of guys that can play at a high level. Throughout the MAC tournament, it was the depth of the Zips that really wore down opponents, and helped Akron advance this far. I'm not sure that this will be such an advantage against a well rested Gonzaga team, but it should be interesting to see how deep Coach Dambrot is willing to go against a much more talented opponent.