This is how it sets up for Gonzaga and their quest to get to the sweet sixteen and beyond.  Obviously, looking at the rest of the bracket, the Zags got probably the most favorable placement out of all the 4/5 regions.  Two mid-majors and a Big 10 school stand in the way of Gonzaga and a likely date with North Carolina in Memphis.  While it is always fun to look ahead and see the potential match ups down the line, each of the teams in the Portland 'pod' present issues for the Zags and will be tough match ups.  We will have some more detailed breakdowns when the games present themselves but for how, here is a primer for the teams between Gonzaga and a Sweet Sixteen.

Rankings:  Not ranked by the AP or Coaches.  Their RPI ranks 99th in the nation and they are 91st as ranked by KenPom.

How they got to the dance: Akron was an afterthought for most of the season in the Mid-American Conference.  The Zips were always very competitive in the MAC but lost a number of close games, including to regular season champ Buffalo, which relegated them to third in the conference heading into the tournament.  They had to run the gauntlet in the conference tournament and did great.  They defeated the top two seeds in the conference, Bowling Green and Buffalo, and brought home the conference title to get the automatic bid.

The Skinny on the Zips:  The Zips get after it on defense.  Akron has the 36th best defensive field goal percentage and is third in defensive turnover percentage.  Their opponents don't score a lot either as the Zips allow less than 60 points per game.  For Gonzaga, the tough defense presented by Akron could be a cause for a concern.  They don't score a lot but they pressure the ball and force turnovers.  We've seen the Bulldogs become turnover prone at times this season and if that happens against Akron, it could be a long day in Portland for Mark Few's club.

Sweet Sixteen Odds:  Sorry Zips, this is a Gonzaga blog and while they present some problems, I don't see Akron causing too much turmoil in this bracket.  They did a tremendous thing in pulling off two MAC Tournament upsets but I think the Akron is one and done.  If I had to put a percentage down for Akron I would say 2%. 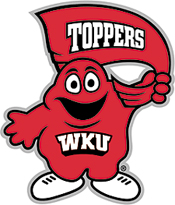 Rankings:  The 'Toppers are not ranked by the AP or Coaches poll.  They do boast a very nice RPI ranking, checking in at 43rd.  They are the 99th team in the nation as ranked by KenPom.

How they got to the dance:  Western Kentucky, like Akron, fought a close battle throughout conference play.  Power in the conference was passed between WKU and Arkansas-Little Rock.  The Hilltoppers came out victorious in the conference tournament however and received the Sun Belt's automatic bid.  They have shown some flashes of excellence this season, the highlight of which being their victory over now number one Louisville in pre-conference play.  They also had games against Southern Illinois, Georgia, and Florida State.  They had some questionable losses in conference play but found their stride late to secure the auto-bid.

The Skinny on the Hilltoppers:  Unlike last year, which saw Western Kentucky rely heavily on the play of Courtney Lee, this season's version of WKU is much more balanced.  They have four players who average well into double figures and on any given night, one of them can go off.  Two names Gonzaga fans should remember are A.J. Slaughter and Orlando Mendez-Valdez.  Both played nice games in Gonzaga's three point victory over the 'Toppers a season ago.  Even though WKU is led mostly by guards, they all rebound very well and have averaged about five more rebounds per game than their opponents this season.  Their biggest advantage, however, will be mentally.  WKU has been there before as they had two victories in last year's NCAA Tournament over Drake and San Diego before falling to UCLA.  They will be a tough out.

Sweet Sixteen Odds:  The hot 5-12 upset pick seems to be Western Kentucky over Illinois.  While I could see this happening, I'm not sure if they can pull it off without guys like Lee and their former star Tyrone Brazelton.  I think they will put up a nice fight in a game they can win but they'll have to play two great games to get to Memphis.  As far as a percentage goes...I'll give them a 15% chance to get past the Illini and the winner of Zags/Zips.

Rankings:  The Illini were surprisingly on the outside looking in for both major polls.  They are the 23rd best team in the nation according to KenPom and have a very healthy RPI rating at 22nd.

How they got to the dance:  Looking at the schedule they played, Illinois had a fantastic year that had to exceed expectations for this team.  Not only did they play in one of the strongest conferences in the nation but they also challenged themselves in pre-conference play.  They earned a decisive victory over the Missouri Tigers early in the season, winning by 16.  They lost a difficult match up to Clemson earlier, dropping that game by two points.  The major knock on the Illini is that they didn't travel a bunch before conference.  While their Mizzou win was in St. Louis, Illinois only played one true nonconference road game and that was against Vanderbilt.  They were four games above .500 in the Big Ten which clinched the birth for the Illini.

The Skinny on the Illini:  First things first, it is important to note that Illinois will be without Chester Frazier in the tournament.  While he doesn't put up amazing numbers, Frazier was a real glue guy for this team and probably their best defender.  Here's why I don't care about that though.  I saw Illinois play a very game Michigan team in the Big Ten Tournament and they absolutely shut the Wolverines, and star player Manny Harris down.  Forget Frazier, Illinois is just a good defensive team led by one of the better coaches in the NCAA in Bruce Weber.  They have lost three of their last four and four of their last seven but Illinois will be ready for whatever.  Sophomore Illini center Mike Davis is one to watch in this game, he's one of the most underrated players in the Big Ten.  He'll be a star when his time is up in college.

Sweet Sixteen Odds:  Illinois is the only power conference team in this pod which bodes well for them because the other three have played sub-par competition for the past couple months.  That is a major advantage for them but they have to figure out what happened against Purdue and make sure it does not happen again.  Their stars did not show up and they have to play great to advance to the sweet sixteen.  The percentage for the Illini to reach the sweet sixteen is 33%.