We all know that the people at Nike are always trying to enhance sports uniforms and they have made another big splash with a new line of uniforms designed for March.  They debuted in Las Vegas and we should be seeing more of them in the tournament.  Here is a look at the uniform and the new shoe... 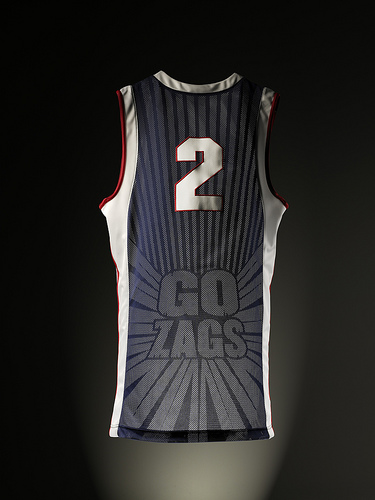 And for the shoes... 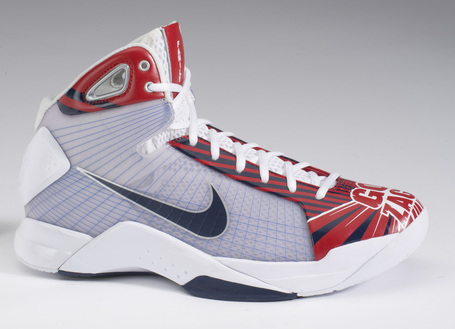 Pretty sweet, huh?  For the complete press release, read after the jump...

After enduring five months of intense competition, today's elite collegiate basketball players are battle tested.  With the style of play evolving each season, Nike is introducing a 360 degree approach complete with new base layer apparel, unique uniforms and customized footwear.  This approach meets the evolving needs for players demanding superior performance with a distinct look.

"College basketball is a tremendously quick and physical game and Nike is committed to giving student athletes the best gear for battle," said Nike Sport Apparel and Innovation Creative Director Todd Van Horne. "Nike Pro Combat reflects the evolution of the game and provides our college teams with quality base layer apparel they need for their tournament runs in March."

For the first time ever, these five schools will also wear distinct Aerographic jerseys during their respective conference tournaments and run for the national championship.  Using Nike Aerographic technology, an engineered mesh providing zoned cooling and dramatically reducing the fabric density, the weight of the jersey is reduced by 31 percent compared to current uniforms.

The Aerographic jerseys debuted on the USA Senior National Team during the 2008 Olympic Games. An exclusively designed "We the People" graphic, inspired by USA's rich history, was showcased on the back of the jersey.

The five NCAA team jerseys are designed to reflect the unique identity of each university.  These design patterns allow more ventilation in the burn-out mesh application.

Duke University: With gothic architectural inspiration, this design was inspired by the Duke Chapel, a major campus icon that speaks to the heritage of the university.  It also includes a rendition of the original Duke crest. Duke will be wearing this jersey in conference tournament action.

Gonzaga University: The spiked collar of Gonzaga's bulldog mascot inspired the circular spiked design while the school's commitment to rise to the occasion led to a symbol of prosperity running vertically at the top.  "Go Zags" is the design's centerpiece.

The University of Memphis: Dynamic tiger stripes representing the boldness of the mascot inspire this jersey design.  The team's "refuse to lose" quote is abbreviated and included at the center of this design.

University of Oregon: Grid pattern detail throughout represents the trusses in the roof on U of O's Mac Court while the beams of the roof run vertically.  The iconic Oregon "O" is the design's centerpiece.

To bring the look full circle each of these five teams went from the backboard to the drawing board by joining NIKEiD for one-of-a-kind shoe design sessions.  The student athletes worked closely with NIKEiD designers to create a look that captures the essence of their program.

The Nike Hyperdunk has ushered in a new era of superior, lightweight design. Featuring Flywire, a performance architecture that uses thin and very strong nylon fibers to support the foot, the Hyperdunk is a favorite shoe among Nike's college teams.

This NIKEiD design sessions marked the first time Nike allowed collegiate teams total control over customizing their own team basketball shoes. The design potential was extensive and players showcased their creativity and team identity. Fans of each school can replicate their team's design beginning March 10 at NIKEiD.com.

The combination of the Nike Pro Combat, Aerographic jerseys and custom Hyperdunks combine for an unbeatable triple threat for March.