Share All sharing options for: Relaxation Time in Spokane 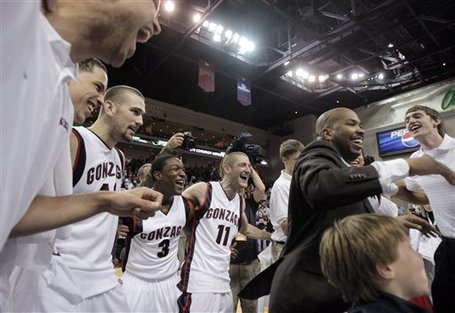 What a West Coast Conference Tournament it was.  Now that the dust has cleared and the BCS schools have started their tournaments, the Zags have a nice break to soak in their tournament victory.  The game on Monday for Gonzaga was important for a number of reasons.  We talked leading up to the WCC Tournament that it was important not only for Gonzaga to come out and win the tournament, but do it in a way that leaves no chance for the tournament committee to look at this team as another 'cute' mid-major.  They exceeded expectations in this regard and you have to imagine that Gonzaga is one of those teams that no one wants to play at this point.

Even though they defeated St. Mary's in their two meetings this season, it felt like Gonzaga was out for revenge on Monday night.  After Patty Mills was injured at the end of the first half in the two team's first match up in Spokane, everyone was claiming that St. Mary's was the best team in the conference with a healthy Patty Mills.  It's pretty clear that Gonzaga heard all this talk and stored it up for a great effort which saw the Zags absolutely dominate the Gaels from start to finish.  Now, there is no more excuses for St. Mary's and the rest of the conference.  Was Mills 100% for the tournament? No clue, but he certainly was a factor and he proved to be the streaky shooter that he has been all season.  Mills was horrible from the field, going 3-12 from the field and only making one shot in the first half.

Speaking of star players that underperform...I've got a bone to pick with the West Coast Conference.  When it was announced that Santa Clara center John Bryant was the player of the year in the conference, it seemed to most like it was the safe pick as Bryant's numbers have been phenomenal (18 points, 14 boards per game).  However, when Bryant took the floor against Gonzaga in the semifinals and did not score untl well into the first half, it was pretty clear that this was not the best player in the conference.  Now I promise I'm not biased about this because I think Bryant has been surpassed this season by two players and that is Matt Bouldin and Diamon Simpson.  While their numbers have not been up to Bryant's level, their play in the conference and what they mean to their team is right up their with Bryant.  Simpson has also saved his best basketball for Gonzaga as he has always been that one guy who has torched the Zags and the same thing happened on Monday as Simpson was the only player for the Gaels to show any desire, scoring 19 points and pulling down nine boards.  Matt Bouldin has been on a tear in conference play and has only scored under double figures three times in the past 19 games.  He has the best court vision on the team and it is pretty obvious that when Bouldin plays well, this team is at a totally different level.

While Bouldin was truly sensational the past few days, the show was stolen by Micah Downs who was able to combine his shooting ability with everything else he has brought this team all season.  The Gonzaga faithful know that Downs came to Gonzaga as a hearlded transfer from Kansas with a bad rap.  He has been nothing short of fantastic during his two years at Gonzaga and seeing him take home the Player of the Tournament award was so gratifying.  Micah had a double double in the first half against the Gaels and finished the game with 12 points and 12 boards.  He lead the charge in the first game of the tournament, shooting lights out and finishing with 18 points.  He's brought so much to this program and the community so to see him win this award was just perfect.

There is not really enough time to praise this team because all you can saw now is that they are one of the hottest teams in the nation.  Watching the Big 12 and Big East Tournament's today puts me at ease because watching teams like Texas and Marquette puts me at ease because Gonzaga could beat any of those teams by 20 points the way they are playing right now.  Think about it, Josh Heytvelt was tremendous against St. Mary's and has been carrying this team late in the season.  Matt Bouldin and Jeremy Pargo are playing outstanding basketball and it looks like Jeremy is starting to attack a lot more right now and it is translating to a better situation for himself and Matt Bouldin.  Steven Gray was in double figures in both games and was shooting the ball very well against St. Mary's.  Austin Daye carried this team in the Santa Clara game and he had to impress the NBA scouts that were watching.  Not to say that he is going pro after this season but if he can carry over that production (28 points on 10-13 shooting) into the tournament and beyond, Daye could be one of the best to even attend GU.  And last but certainly not least, Demetri Goodson was just phenomenal.  Meech was making unreal moves to the hoop against St. Mary's and he joined the double figures party, scoring 11.  There were a number of times that EDZ and myself were saying that he could start right now for Gonzaga and we would really not be that worried.  He is going to be simply amazing in his four years at Gonzaga.

There's nothing else to really say at this point except just sit back and relax.  Gonzaga is running like a well-oiled machine lately and have taken care of business.  With more and more mid-majors falling like Butler and Davidson, it is comforting to see the Zags do their part and let everyone else worry about the bubble.  Oh yeah, root for Portland State tonight as the Vikings look to win the Big Sky Championship.  If that happens, their is a good chance that every Gonzaga loss will have come to a team that is in the NCAA Tournament.  Arizona and Tennessee will have to do some work in their conference tournaments but overall, Gonzaga's 26-5 record looks very, very good.