Share All sharing options for: Week 13 Rankings at a Glance...

From the CBS BlogPoll breakdown, we get a fun shoutout...

The Straight Bangin' Award--given for the most biased vote against one's own team--will almost always be the property of a team that's just suffered some brand of humiliating and/or emotionally devastating defeat. So it goes this week: Gonzaga blog The Slipper Still Fits left Zags off their ballot entirely after an ugly home loss to Memphis, a match-up I'm personally referring to as the Too Big for Our Conference's Britches Classic.

There is no doubt that quite a bit of emotion went into our poll this week after the Gonzaga loss and we think it is deserved.  The fact that we are still ranked at 19th and 21st, respectively is very surprising.  When you break down the anatomy of the loss and the fact that Gonzaga was completely ineffective in every facet of the game, it's hard to justify such a high ranking.

But I guess it has been a crazy season for every team in the nation in some way or another.

When you look at the rest of the rankings in the table, I think Gonzaga escaped with a best case scenario after a loss of that magnitude.  Bad games happen and the nation seems to all agree that GU just had an off night.  The RPI is still somewhat respectable at 38th but that will certainly drop off after playing the rest of the conference schedule not to mention South Carolina Upstate who is currently 298th in the RPI (LMU is currently in the 320's). The KenPom is still high and will probably never really go below 15 unless the Zags suffer a catastrophic loss in conference play.

The most surprising ranking for me today was Joe Lunardi's Bracketology, here's a look. 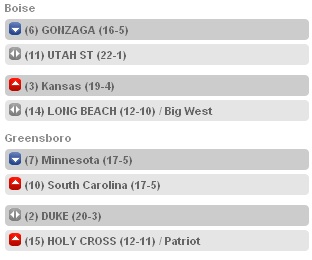 This is the best news of the day.  Gonzaga being in Boise would be a tremendous blessing because it would be an extremely pro-Gonzaga crowd.  When you break down this bracket it seems like Gonzaga could make some noise.  Kansas is still an extremely young team that seems to be a very weak three seed.  Utah St. is a tough team but I can't imagine the Zags falling to the upstart Aggies so close to home.  I think Duke easily cruises through the other side and then who knows what could happen.

If you are a Gonzaga fan, you have to be smiling about these rankings after a very tough Saturday.  The world is not over, indeed!