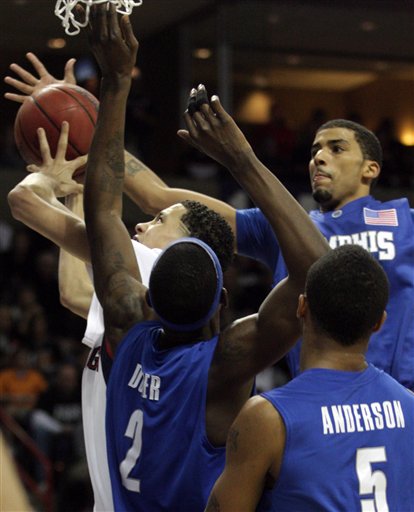 I did not see this one coming.

Gonzaga was handed a beautiful, golden opportunity last night in the Spokane Arena and they refused to capture it.  It's really impossible to even attempt breaking down this game because there was not one thing that went right.  I understand that teams come out flat every now and again and this season has been full of parody but when you are a team like Gonzaga that doesn't play a lot of big time games, you have to come up big in the few chances you have.

Gonzaga was flat out terrible last night in every phase of the game.  Kudos to John Calipari who gave Mark Few a first hand look at what it means to be a big game coach.  Memphis looked like the best team in the nation last night.  They enforced their will and their type of game on the Zags and it was really never even close.  Just like the Portland and Gonzaga game was men vs. boys, so was last night.  That might be the most disappointing aspect of the game because everyone thought Gonzaga was clicking on all cylinders after the Pilots game.  The three guard lineup of Jeremy Pargo, Steven Gray, and Matt Bouldin was phenomenal on Thursday and then last night it was nearly unbearable.  Jeremy Pargo had two more points than I did last night.  Matt Bouldin continued to be Memphis' favorite opponent and Steven Gray was nowhere to be found.

Gonzaga showed it's immaturity as a team last night and their was absolutely zero leadership shown.  On the other side of the court, Memphis was led by their two best players, Robert Dozier and Tyreke Evans.  They were both absolutely phenomenal.  While Josh Heytvelt and Austin Daye were trying to find their games, Evans and Dozier were absolutely exposing Gonzaga.  They were able to get the rim with relative ease and utilized the kick out to perfection.  And I'm not a coach and don't pretend to be one but I feel like zone defense can hurt you in two ways:  rebounding and defending the three point shot.  The Tigers hurt Gonzaga in both ways but Mark Few chose to stick with it.  Why?  I have no clue but the amount of putbacks last night was just mind boggling.

Positives?  I guess Micah Downs who was the only person that looked like they cared.

There is really no other way to put it, Gonzaga was exposed last night.  I am as guilty as anyone.  I bought in to the great defensive field goal percentage and I bought into thinking that this team was playing as well as anyone in the nation.  It's pretty clear now that Gonzaga might be destined for another deflated seed in the NCAA Tournament and probably an early exit.

So, Gonzaga fans, kiss playing in Portland or Boise goodbye.  Say hello to a 6 or 7 seed against a very good team.

Up next is St. Mary's, thank God they don't have Patty Mills.