Share All sharing options for: College Gameday: Zags vs. Memphis 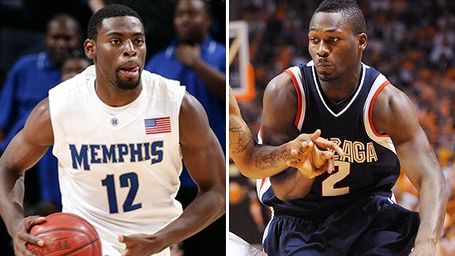 The college basketball world will turn its attention to Spokane tomorrow night, as the Gonzaga Bulldogs and Memphis Tigers will meet in the Spokane Arena. Both teams enter this game on lenghy winning streaks (Memphis-13 wins, Gonzaga- 9 wins), and it should be a terrific enviornment at the Arena tomorrow night. There is no denying that both these teams are the class of their respective conference, and this game should provide an excellent opportunity to see where Gonzaga and Memphis stand on the national level. This game has developed into one of the best non-conference rivalries in college basketball, and I expect tomorrow to be no different.

It's astounding to think of the talent and athleticism that John Calipari has brought to Memphis over the past couple of seasons. Although the Tigers lost Derrick Rose, Joey Dorsey, and Chris Douglas-Roberts, John Calipari has this Memphis Tigers team playing at an incredibly high level.

Leading the way for Memphis is Tyreke Evans. Evans is arguably one of the top freshmen in the country, and he has really taken off since he began playing PG for the Tigers. At this point, Evans is averaging 16.8 points, 5.4 rebound, and 3.9 assists. The offense has improved so much with Evans at the point, and his switch to the PG position has been the catalyst for this impressive 13 game winning streak. It's imperative that Steven Gray and Jeremy Pargo keep Evans in front of them on the defensive end, because he can be unstoppable if he is able to attack the rim. Evans can be a very streaky shooter, and the best way to guard him is to make him beat you from the outside. However, if his shot is falling, Evans can be one of the toughest match ups in the country.

The two returning contributors from last season are Robert Dozier and Antonio Anderson. Both Dozier and Anderson have seen their number improve from last year, and both have also become tremendous leaders for this team. Although I am not a huge fan of Robert Dozier, he is averaging an impressive 11.8 points and 6.9 rebounds this season. Dozier is blessed with incredible length and athleticism, but if you play Dozier tough and physical, he can be taken out of his game. It will be interesting to watch Austin Daye and Micah Downs guard Dozier, and I wouldn't be surprised at all to see Ira Brown guard Dozier when he is in. The strength and physicality that Ira plays with could be huge in getting Dozier out of the flow of the game.

Although Antonio Anderson proved he wasn't a PG at the start of the season, he is still a tremendous leader for the Tigers. Anderson is leading the team with 4.4 assists per game, and he is one of the more reliable free throw shooters on what is a very poor shooting team. I expect to see either Matt Bouldin or Steven Gray on Anderson at the start, and I think both have the strength to contain Anderson off the dribble.

It should be a tremendous atmosphere at the Spokane Arena tomorrow night. Both these teams know that a win in this game could move them up 1 or 2 seeds in the final bracket in March. I love the athleticism and talent that Memphis brings to the arena, but I think that their lack of depth could be the difference in this game. I think that over 40 minutes, the depth and athleticism of the Zags will wear down Memphis, and the Zags will emerge with a 83-74 victory.