Share All sharing options for: Gonzaga Rolls Over Portland with Memphis Looming 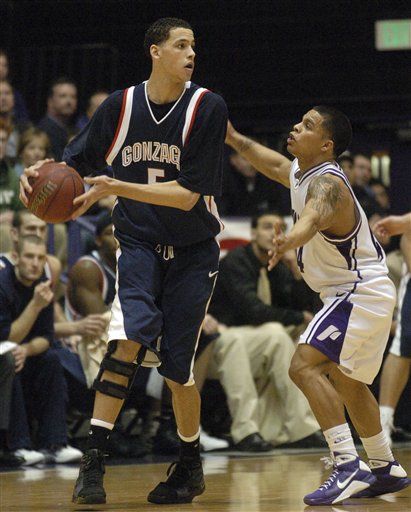 In the first half I was getting pretty worried that I would have to write this blog about the dangers of a trap game.  Portland looked like Portland State and they were hitting every shot from beyond the arc and really had plenty of momentum going into the break.  But, like they say, it is really hard for teams to stay that hot for the entire game and the Pilots cooled off just in time for the Zags to get hot.

The second half was complete domination and it really looked like men vs. boys (picture above) tonight in Portland.  There's no doubt that Portland is a great story and the program is definitely one of the bright spots in the West Coast Conference but they were severely outmatched.  Led by the dazzling play of Matt Bouldin and Jeremy Pargo, Gonzaga was able to get to the hoop all night in their 93-78 victory over the Pilots.

continue reading after the jump...

It was a picture perfect game for the starting lineup.  Four bench players entered the game for Gonzaga and only played 27 minutes combined...and they only scored 2 points on a lone Ira Brown put back in the first half.  Mark Few did an outstanding job and sticking with what was hot and letting it roll all night long.  The most consistent threat for Gonzaga tonight, and most nights, was junior Matt Bouldin.  Bouldin seemed to be thinking one step ahead of the opposition all night long tonight and he torched the Pilots from the inside and out.  Like we have said numerous times, there is not a guard in the WCC that can match up with Matt Bouldin.  He is far too strong and smart to be stopped in this league.  He tied his career high in points with 26 tonight and was also able to lead the team in assists with eight.  He was virtually perfect from all around the court, shooting 8-11 from the field (3-4 from three).  He never forced but he was able to take over the game in his own way, especially in the first half.

There is no doubt that tonight was a vintage Jeremy Pargo night.  A season ago, Pargo steamrolled the competition.  He took over basically every game for Gonzaga and was a master at getting to the rack.  This year has been a bit different with Jeremy as he has been consistently looking to pass first but tonight we saw the old Jeremy where he dedicates himself to driving and making plays and the team responded.  Matt was able to take the role of main distributor and Pargo was phenomenal on the drive and occasional kick.  He looks to be a very, very confident player heading into the Memphis game which has become extremely important to this team's postseason standing.

It was a bit of a slow start for Gonzaga's front court.  Austin Daye and Josh Heytvelt were reduced to innocent bystanders for the first twenty minutes but in the second half they were extraordinary.  Especially Daye who once again had a double-double, 14 points and 12 rebounds, and is proving to be nearly unstoppable when he asserts himself.  Although he struggled on offense in the first half, his defense throughout the night was exceptional.  He led the team with three powerful blocked shots and was an absolute nightmare for Pilots that entered the lane.  Josh Heytvelt had some foul issues and it was another ho-hum 15 point game for him including a few powerful slams.  Josh has been a very solid scorer for this team, no matter how quiet he is.

There is no doubt in my mind that if this team plays 40 minutes against Memphis like they played the second half against Portland, they will come away victorious.  It was a very technical and sound game in the second half and once the Zags got up by four, I knew I could stop worrying because this team senses blood in the second half and really attacks it.  On the flip side of that, the first half was pretty ugly and it is imperative that they don't play that way come Saturday because John Calipari and the Memphis Tigers are not as cute as the Portland Pilots.  They will be on the attack and they have the capability to bury Gonzaga if they show any sort of weakness.  Once again, I'm a firm believer that it all rests in the hands of the backcourt and Bouldin, Pargo, and Gray are all playing with tremendous confidence which bodes exteremly well for this team that is trying to do something it has not done in three years; BEAT MEMPHIS!