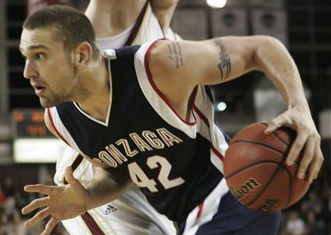 Normally the home crowd is supposed to help the home team but Santa Clara's student section, the "Rough Riders", seemed to be in favor of Gonzaga.  The Broncos were playing some great basketball in the second half and actually tied the game up at 56.  Gonzaga then went on a run that was aided by the Santa Clara student section throwing objects on the court, causing a technical foul against the Broncos bench.  Kerry Keating implored the students to refrain from throwing things on the court but they didn't listen and later in the game, some sort of wrapper was thrown on the court, causing another technical foul.  Matt Bouldin cashed in on the free throw attempts and Gonzaga was able to escape Santa Clara with their 13th conference win.

continue reading the rest of the recap after the jump...

The incident caused by the student section was a small side story in comparison with the type of night that Gonzaga big man Josh Heytvelt was having.  The senior center continued his torrid February and torched the Broncos, and much heralded John Bryant, for a career high 29 points on 12-17 shooting.  Showing his versatility off, Heytvelt also nailed both of his three point attempts and fell one rebound short of a double-double with nine boards.  While John Bryant put up another cute stat line (16 points on 7-9 shooting and 11 rebounds), he has had two games against Gonzaga to forget.  Tonight, Josh Heytvelt absolutely dictated the play in the paint and made John Bryant's double-double seem very forgettable.  Heytvelt had a great quote tonight about his play lately:

"I've got to give credit to the perimeter players, I'm not doing a whole lot different. They're just finding me in good situations. Things come pretty easily when they do that."

This is a very adequate description of what has been going on lately.  The team has been making a concentrated effort at getting the ball to Josh at least once on nearly every possession.  Unlike the start of the season where it seemed like the perimeter players were avoiding getting the ball into Josh, they have come to realize that the best offense they have starts and stops with Josh.  They found him on a number of occasions where he had great position but he was also working to make his own shot as well.  He had a number of put backs and seems to be getting more and more comfortable in the paint.  Don't forget that his new career high of 29 points came against and All-WCC big man who is in the running for conference player of the year.  If this effort stays consistent throughout the rest of the year and up into the NCAA Tournament, Gonzaga could become one of those teams that nobody wants to see.  The nation had a glimpse of just how good Heytvelt could be in his sophomore season and it would be great to see him recapture that and continue to rebuild his legacy.

Two Gonzaga guards also turned in some very nice performances.  Matt Bouldin seemed to live at the free throw line all night.  He did a great job from the stripe, shooting 13-15 and finishing with 23 points.  He struggled with turnovers but overall, Matt had a very good game.  Senior guard Jeremy Pargo was in control the entire night and had a very quiet 10 points and five assists.  The best part of his stat line however is the 0 in the turnover column.  Mistakes handling the ball is something that Jeremy can not do if Gonzaga is going to have any sort of impact in postseason play.

Now, all that stands in the way of Gonzaga's perfect record in the WCC is the San Diego Toreros.  If the Zags are able to come away from San Diego with a victory, they will finish unbeaten in the WCC for the third time in 29 years.  Unbeaten in conference play is something that just does not happen all the time.